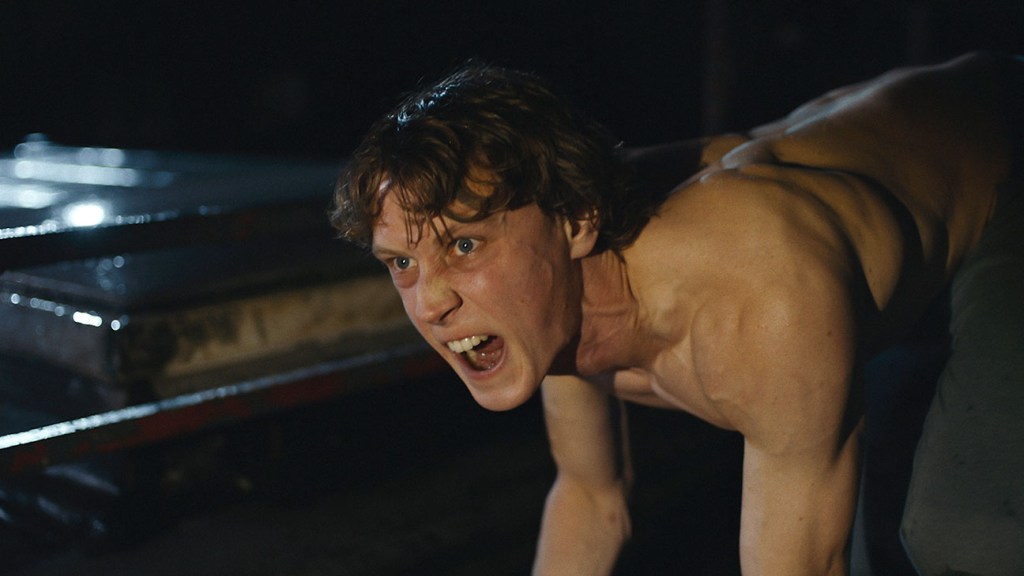 It’s easy to make assumptions about a movie called Wolf before you see it. Will this tale about a young man who believes he’s a wild animal be a horror film? A raunchy comedy? A combination of both, like An American Werewolf in London? The sophomore feature from director Nathalie Biancheri (2019’s Nocturnal) defies such lowbrow expectations by instead being a serious indie drama about species dysphoria (it’s a thing) and the cruel methods used to cure it by a ruthless doctor. And while that sounds like it could lend itself to plenty of unintentional humor, the filmmaker exerts such strong stylistic control over the material that she miraculously manages to make it work. Wolf certainly won’t be for all tastes, but adventurous filmgoers will find much to appreciate.

British actor George MacKay, who here gets to display even more intense physicality than he did in 1917, plays the central character of Jacob, who suffers from the aforementioned condition. His concerned parents send him to the quaintly named True You clinic, where his fellow patients include people who think they’re such animals as a duck, squirrel, horse, panda, spider and parrot. The facility also includes a longstanding patient, the feline Wildcat (Lily-Rose Depp), whose seniority apparently allows her to roam the grounds at will.

Although a kindly, empathetic therapist (Eileen Walsh) conducts many of the sessions intended to help the patients reconnect with their human identities, the institution is in fact run by Dr. Mann (Paddy Considine). Referred to as “The Zookeeper,” his approach is very much one of tough love, lapsing into sadism. To cure the hapless Jeremy (Darragh Shannon), who considers himself a squirrel, he instructs the young man to attempt to climb a tree using his fingernails as claws, with predictably grisly results. And he encourages Judith (Lola Petticrew), who thinks of herself as a parrot (and amusingly costumes herself as such), to jump out of a second-story window to see if she can, in fact, fly.

Jacob is not immune to such treatment, sometimes being forced to wear a collar or be confined to a cage. His wolf-like instincts continue to rise to the fore, however, as he wanders around the facility on all fours and howls at the evening moon. And his connection with Wildcat is definitely physical as well as emotional, as evidenced by their animalistic mating rituals. The pair’s growing bond, and Jacob’s efforts to survive The Zookeeper’s increasingly dangerous therapeutic methods, form the crux of the story.

Although allegorical opportunities are plentiful, writer/director Biancheri thankfully avoids being too heavy-handed about them. She also provides much-needed doses of dark humor, such as having the parrot girl live up to her avian inspiration by repeating everything she hears. She does come up short, however, in providing much insight into the unusual psychological condition being depicted, save for one not terribly convincing scene in which it’s explained that a man who thinks he’s a lion had an experience in which he was forced to consume a fellow passenger after a plane crash.

What truly makes the film work are the highly committed performances by its three leads. Considine delivers a scarily commanding turn as the doctor so firmly convinced of the efficacy of his extreme methods that he’s willing to put his patients in danger. And MacKay and Depp embody their animalistic characters to perfection. Under the clearly expert tutelage of movement coach Terry Notary, whose motion-capture performance credits include Avatar and the Hobbit and Planet of the Apes series, they employ their lithe physicality to tremendous effect. They manage to make species dysphoria seem sexy as hell.