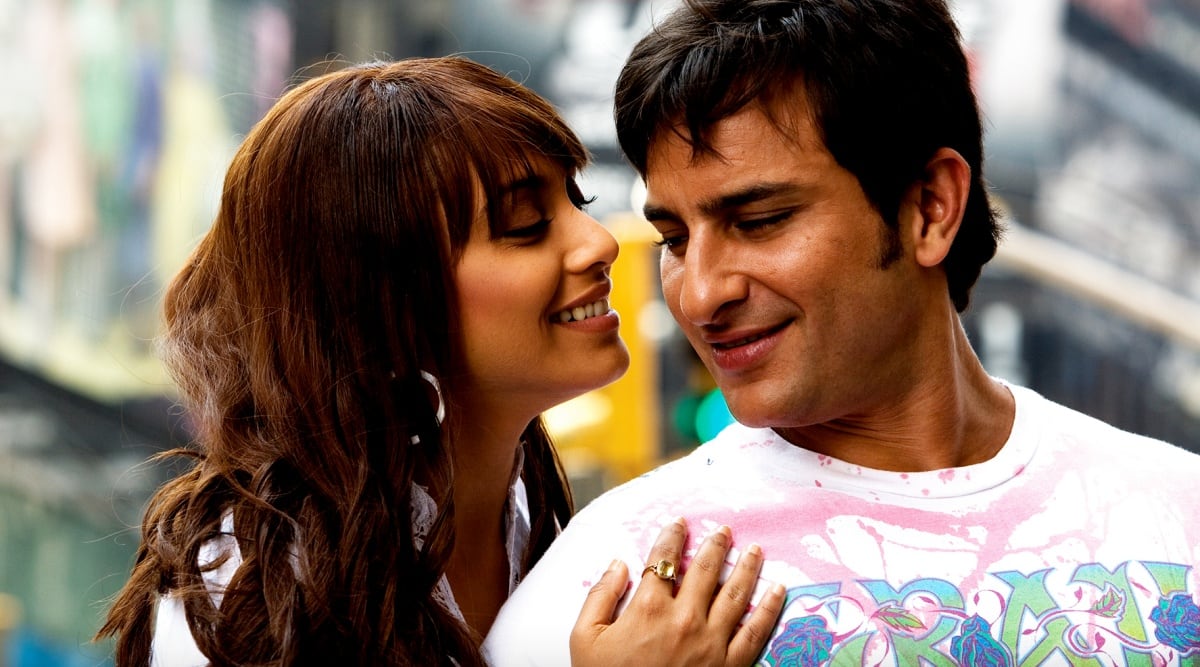 The early 2000s was a distinct phase for Hindi cinema. Post Dil Chahta Hai, our understanding of what constituted as ‘modern’ had changed dramatically. Saif Ali Khan emerged as the new poster boy of coolness, thanks to the Farhan Akhtar directorial. Looking back, it appears that Yash Raj Films tried to capture that changing expression of modernity in their films via their characters, actors and locations and it had quite an impact on that era of Hindi films. It was in this era that Saif Ali Khan enjoyed the uber-cool ‘metrosexual’ persona and Rani Mukerji was the woman with a midas touch.

To paint a picture, this was a time when YRF made movies like Hum Tum and Tara Rum Pum where relationships looked modern, but were backed by the traditional filmy pyaar. They made movies like Salaam Namaste and Saathiya that were primarily love stories, but were presented as a new take on Bollywood rom-coms. Love stories or romcoms aren’t the ‘it’ genre anymore but watching Saif and Rani in the promos of Bunty Aur Babli 2, we can’t help but look back on the days when the 21st century was taking off, and the idea of romance and relationships in Hindi movies was starting to evolve. Rani Mukerji and Saif Ali Khan became the ‘it’ couple after Hum Tum.

It was in this phase of the early 2000s that Saif Ali Khan found a new lease of life in the film business and Rani Mukerji solidified her image as the girl-next-door. For Saif and Rani, their first outing together was as Karan and Rhea in Hum Tum and it turned out to be a complete game changer. Saif’s ‘Tom Cruise look’ got him his first National Film Award and for Rani, who was already the reigning Bollywood queen at the time, this film gave her a chance to showcase her mature, emotional side. As they fought each other in ‘Ladki Kyu Na Jane Kyu’, their infectious energy gave the film an upbeat start. At this point, it seemed that they could be the new SRK-Kajol.

In every decade, Hindi cinema is looking to find its new perfect jodi and since SRK and Kajol had reached that status with Dilwale Dulhania Le Jayenge, the hunt for the next perfect screen pairing was on. And it seemed like they fit the mold perfectly. Much like SRK, Saif had the talent to be witty and play a romantic lead and Rani was the woman whose screen presence was quite reminiscent of Kajol in the 90s. Hum Tum was also one of the first films where Saif registered a hit without any other male lead in the film.

They could have been the ‘it’ jodi of the time but soon Bunty Aur Babli released and Rani Mukerji-Abhishek Bachchan were everything the fans were talking about. So much so that when Rani’s character leaves Abhishek’s character in Kabhi Alvida Naa Kehna, it was a hard pill to swallow for the audience.

Saif and Rani returned together on screen in Sidharth Anand’s Tara Rum Pum, which seemed like the story of the same two characters that we saw in Hum Tum. Of course, the names were different, and the professions were different but in terms of their visual aesthetic, it looked like these people were all from the same universe. By the time, this film rolled around, the newness of the urban love story was starting to fade but Saif and Rani still had enough charisma to pull off a story that, in hindsight, wasn’t all that impressive.

Now, 13 years later, Saif Ali Khan and Rani Mukerji are back together for a sequel of Bunty Aur Babli which should ideally have had Abhishek Bachchan in the lead role, but that’s a discussion for another day. Saif and Rani were the SRK-Kajol for the early aughts for a hot minute and watching them be what they were decades ago is just a sweet reminder of the time when they were funny, romantic and just magic on screen.