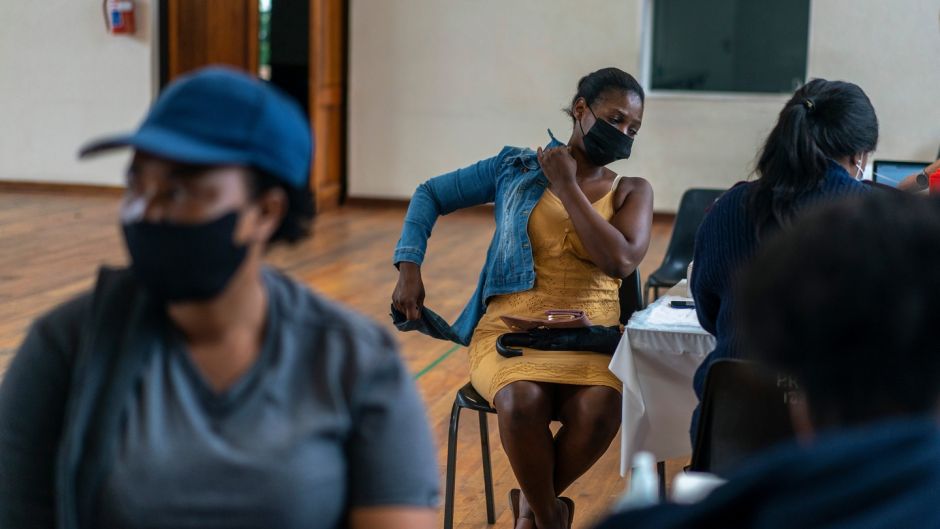 The panicked reaction across much of the world to the Omicron variant comes with a scramble for information. In South Africa, the country where Omicron was first identified and where cases are jumping, scientists and doctors describe what they are seeing.

Here are highlights from several interviews and a briefing.

Marc Mendelson, the head of infectious diseases at the University of Cape Town, who also works at Groote Schuur Hospital, where the world’s first heart transplant took place:

* “Anecdotally, we are seeing a lot of reinfections. What we don’t know at the moment, because we haven’t got the data yet, is how many of those people are unvaccinated versus the vaccinated.”

* “While people are freaking out, the other thing to stress is that if you look across the variants, the vaccines have protected against severe disease, hospitalisation and death. And really, looking at the Omicron mutations, though there are an awful lot of them, there’s nothing really to indicate that the ability of vaccines to fight this is going to be affected to a very great extent.”

* “In truth, it doesn’t want to kill you, it wants you to stick around.”

* “The only ones putting their hand on their hearts and telling the world don’t worry, this is going to be mild, haven’t learned enough humility yet in the face of this virus.”

* “It’s always nice to hope, but don’t set everything on this because I think your hopes could be dashed.”

* “If in the second and third wave we’d seen these levels of positivity to tests conducted, we would have seen very significant increases in hospital admissions and we’re not seeing that. In our primary care clinics it is mainly people under 30 years old.”

* “So I actually think there is a silver lining here and this may signal the end of Covid-19, with it attenuating itself to such an extent that it’s highly contagious, but doesn’t cause severe disease. That’s what happened with Spanish flu.”

* “We are seeing breakthrough infections of people who have been vaccinated, but the infections we’re seeing are very mild to moderate. So for health care workers who have had boosters, it’s mostly mild. I think this whole thing has been so poorly communicated and so much panic generated.”

* “It’s early days, but I’m less panicked. It feels different to me on the ground.”

Shabir Madhi, a vaccinologist from the University of the Witwatersrand, who led trials of both AstraZeneca Plc’s and Novavax Inc’s shots in South Africa:

* “Omicron seems to be moving at a faster speed than Delta, but at the same time what seems to be happening is that our hospitalisation rate is somewhat more muted.”

* “Vaccine or past transmission create T-cell immunity, which are good at protecting against severe disease and death. The mutations of the virus very likely make it more successful against antibody activities, but it seems like there may well be preservation of the T-cell immunity.”

* “I’m optimistic that in this resurgence, while the total number of cases will probably be greater, hospitalisations and deaths will be lower than what we experienced during the course of any of the first three waves. And that is, because right now in South Africa, all indications are that 75 per cent to 80 per cent of people were infected with the virus during the course of the first three waves. That is probably going to equip those individuals – not to resist infection – but rather prevent progression of infection to severe disease.”

* “All the data has shown that children have a less severe clinical course and we’ve had some anecdotal reports from hospitals in South Africa, that yes, they are seeing a few more children in some of the hospitals and are admitting them, but many of them have an uncomplicated clinical course during the few days that they are in hospital.”

* “This virus may be similar to Delta in its ability to spread or in being contagious. However, it’s the susceptibility of the population that is greater now because previous infection used to protect against Delta and now, with Omicron, it doesn’t seem to be the case.”

* “However, we believe that with the reinfections the disease will be less severe and the same would hold for those that are vaccinated. So that would be good news.”

* “While there are large numbers of cases and evidence of increased hospitalisations, large-scale sequencing would show if this variant is starting to fully displace the Delta variant. Current evidence shows that Omicron accounts for about 75 per cent of the variants in circulation overall.”

* “If it does displace the Delta variant, we’d need to see if this is the result of immune evasion or because of increased transmissibility.”

Leon Geffen, a general practitioner in Cape Town’s Sea Point suburb and director of the Samson Institute for Ageing Research:

* “We are seeing a massive upsurge in the total number of cases,” he said. “People are mostly presenting with coughs and upper respiratory tract infections.”

* “Most people I have seen or spoken to have been vaccinated.”

* “It was like a tap being turned on from Thursday or Friday last week. It’s been mostly young people, but there have been some older people, probably around 20 per cent.”

* “Most of the kids have got it at communal events. They are from a younger demographic and presenting with milder symptoms, mainly sore throats and respiratory phenomenon. But, even in older people, it’s been relatively mild.”

* “No-one has been even close to being seriously ill. But it’s probably too early to tell if this will be a milder variant.” – Bloomberg