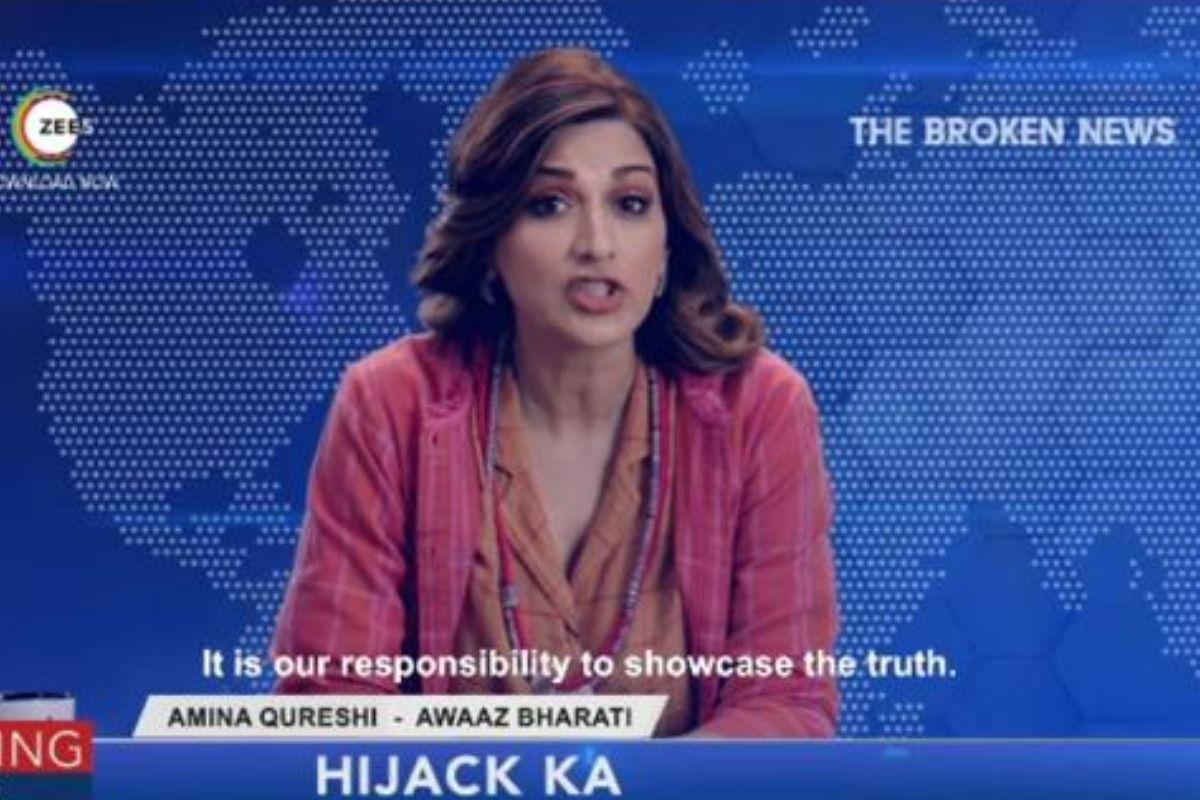 The Broken News Teaser: The Broken News, an unique drama sequence that additionally marks actor Sonali Bendre‘s debut on OTT with ZEE5, is the first Hindi production announced as part of this ongoing cooperation. Director Vinay Waikul helmed the adaption of the iconic British series ‘Press,’ which stars Jaideep Ahlawat, Shriya Pilgaonkar, Indraneil Sengupta, Taaruk Raina, Aakash Khurana, and Kiran Kumar, amongst others. The present’s premise revolves round two rival information networks located in Mumbai: Awaaz Bharati, an unbiased, moral information channel, and Josh 24/7 News, which promotes sensationalist and invasive journalism, in addition to the interactions between the principle characters of their pursuit of stories.Also Read – ZEE5 Dials Up The Content Game; Announces Stellar Slate of 80+Titles For 2022

The official Instagram deal with of ZEE5 shared the teaser of their upcoming sequence ‘The Broken News.’ They captioned the put up, “What do you seek from your news, Sansani ya Sach? Watch the truth behind your daily news in #TheBrokenNews coming soon on #ZEE5” Also Read – Here’s What Shriya Pilgaonkar’s Father Said When he Saw Her Playing Lawyer in Amazon Prime Video’s Guilty Minds

Watch the teaser of The Broken News right here:

Commenting on the partnership, Mr. Manish Kalra, Chief Business Officer, ZEE5 India mentioned, “This year we have a fantastic line-up with many big titles announced in the first quarter of the year. The focus for 2022 is to bring premium quality content across genres and languages. ZEE5, in addition to bolstering its portfolio of Hindi originals, is simultaneously working on curating a list of unique stories across formats and languages to build a platform of varied choices for its viewers. With The Broken News we are marking the beginning of another partnership with a reputed content studio to bring interesting and unique story narratives to our audiences. This partnership is in line with ZEE5’s strategy to build a portfolio of unique and compelling content for enhanced value from the services. We are sure our audiences will enjoy and love it as much as they have loved our content so far. ZEE5 has been working with the best talent in the creative ecosystem to create a riveting slate of originals, in line with our content strategy of keeping the viewers at the centre of the business.”

In the announcement of the brand new title, Ms. Nimisha Pandey, Chief Content Officer, Hindi Originals, ZEE5 mentioned, “The Broken News is an extremely relevant story for the times we live in. We are glad to partner with BBC Studios India and director Vinay Waikul to bring this story to life. It is a riveting drama depicting the nuances of the media houses and the daily hustle-bustle of a newsroom. The story revolves around the ideological differences of the protagonists, beautifully played by Shriya Pilgaonkar and Jaideep Ahlawat. The story has a strong, contemporary, and compelling narrative making it a perfect addition to our content bouquet.”

Speaking on the partnership, Sameer Gogate, General Manager – BBC Studios India shared, “We are thrilled to join forces with ZEE5 as part of this partnership to produce this riveting BBC Studios format, set in the fascinating world of TV news journalism. The strength of our formats lies in their ability to transcend across cultural boundaries and languages. We are honoured that Jaideep Alhawat, Sonali Bendre, and Shriya Pilgaonkar will be a part of this journey directed by Vinay Wiakul and we hope ZEE5’s Hindi audience will enjoy the gripping personal and professional dramas facing the characters under the pressure of a 24-hour news cycle.”

The unique UK sequence, Press, was created and written by award-winning author Mike Bartlett (Doctor Foster, King Charles III), and is a Lookout Point, BBC Studios, and Deep Indigo manufacturing, co-produced with Masterpiece. It aired on each BBC One within the UK and on PBS Masterpiece within the US in 2018, with the unique sequence set in a print newsroom relatively than a TV newsroom.