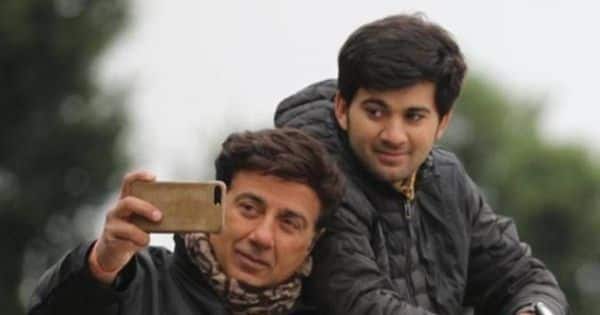 When Kapil asked Sunny about how comfortable is he in doing romantic scenes in front of his father Dharmendra and his son Karan Deol, the Gadar actor looked at his son and said, “He (Karan Deol) was an infant when I was shooting for a film with Juhi Chawla. So, in one scene I hug her and all that. It was a song sequence. He was behind me, in my cousin’s arms. So during that scene he started to cry loudly.” Also Read – Gadar 2 goes on floors: Sunny Deol and Ameesha Patel’s first look as Tara Singh and Sakina OUT from the sets

Meanwhile, Karan is on cloud nine as he got the golden opportunity of working with his uncle Abhay Deol in Velle, produced by Ajay Devgn and directed by Deven Munjal. He feels that this dream-come-true opportunity is something he will cherish for a lifetime and he is keen on working with his uncle Abhay, whom he calls, “Dimpy chacha” with love. Also Read – Kapil Sharma asks John Abraham how to lose 10 kg weight in a month; here’s how the Satyameva Jayate 2 actor responded

This film is a remake of the Telugu crime comedy, Brochevarevarura. Abhay Deol who was away from the screen for quite sometime will be sharing the screen with Karan Deol for the first time. It also stars Mouni Roy in a special appearance.

Director Deven Munjal shared his experience of working with actors Abhay Deol and Karan Deol in his upcoming film Velle. “Abhay Deol and Karan Deol, both of them love their acting job, Karan comes with freshness and Abhay comes with his experience, so that way I got to know both of them well. Me and Karan have done a lot of workshops together, which increased our bond with each other. We got to know each other well on the set and, on the other hand, we also got to learn a lot from Abhay’s experience,” he said.