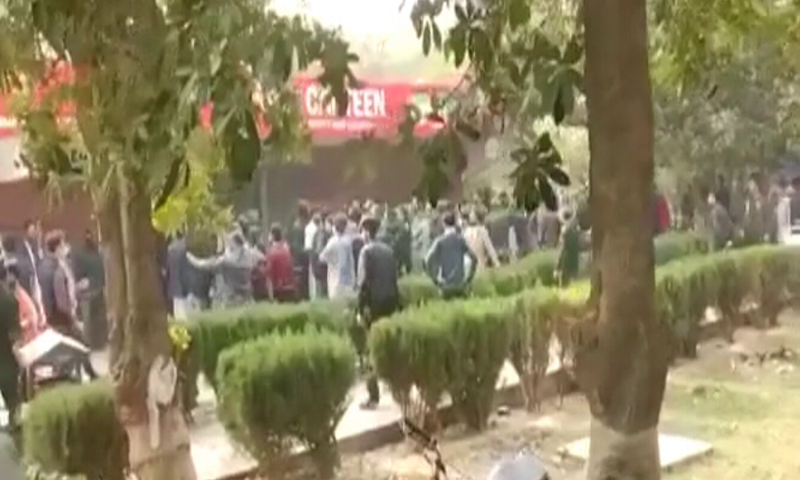 Hundreds of student activists ransacked the offices of the vice chancellor, registrar and public relations officer at Lahore’s Punjab University on Friday after a clash erupted between two student groups.

Punjab University spokesperson Khurram Shahzad confirmed the incident in a statement, saying supporters of the Islami Jamiat Talba (IJT) had ransacked the office of the varsity’s registrar and others “following a fight between some students and outsiders” near the varsity’s main cafeteria.

He added that a complaint had been filed with police for legal action over “vandalism” at the varsity, adding that the university administration will “expel all those students involved in the incident” in accordance to the law.

“The university has taken measures to establish peace on the campus and only a few dozen students on all sides are trying to disturb the peaceful environment of the university. The administration is identifying these students with the help of footage and strict action will be taken against them as per the law,” he said.

Meanwhile, Punjabi Council spokesperson Khurram Gondal told Dawn.com the IJT activists had engaged in a clash with them on Friday following a dispute over putting up the posters of two events each of the group was separately organising.

The dispute had started three days ago when IJT activists had a brawl with Punjabi Council members, who were organising a cultural programme and had put up posters for the same at the varsity’s hostels. However, IJT members replaced them with the posters for their event.

According to Gondal, IJT supporters “tore and burnt our posters”. When members of the Punjabi Council objected to it, the dispute came to a head.

Some IJT activists were injured in the incident and a first information report (FIR) was registered against those involved.

On Friday, IJT members were staging a protest outside the admin block at the university, demanding the arrest of those involved in attacking them, when the situation escalated and they ransacked the offices, damaging doors and windows.

IJT spokesperson Adeel Chaudhry said the protest was held to demand action against “outsiders who were living in the [varsity’s] hostels and nominated in several cases”.

“These outsiders should be arrested because they were creating a law and order situation at the campus,” he demanded.

The IJT also issued a statement, accusing members of a “nationalist council of attacking its peaceful members with sticks” after Friday prayers. The statement said the condition of three of its members was critical as a result of the “torture”.

The group vowed not to let such “unlawful elements” destroy peace at the university, and also demanded the immediate arrest of students against whom the FIR was registered.

For his part, the Punjabi Council chairperson claimed that the IJT nazim from the varsity’s Hailey College of Commerce, accompanied by hundreds of the group’s activists, had attacked the council’s members in the main cafeteria and left four of them injured.

The situation at the university was brought under control when a large contingent of police reached the spot and dispersed the protesters.