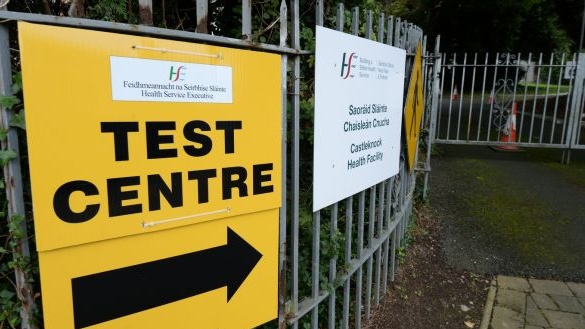 The State’s PCR testing system has come “under pressure in the past 48 hours” due to increased demand, but it will continue over the Christmas period, the HSE’s lead for vaccination has said.

Damien McCallion said people seeking a test would be able to avail of one on Christmas Day and St Stephen’s Day, but there will be a “slightly reduced service”.

“I know it’s difficult for people waiting for results but the advice remains the same, if you have symptoms you should isolate,” he told RTÉ Radio One’s Morning Ireland.

Mr McCallion said the system is now at a “record number of laboratory tests”, with over 235,000 conducted in the past seven days.

He added that while it appears there are no PCR slots available on the website at the moment, “there will be slots available over the day as we look at the attendance rates and referral rates from GPs”.

Some 7,411 cases of Covid-19 were notified on Thursday evening, bringing the total number of confirmed cases since the beginning of the pandemic to 680,375.

There were 393 confirmed cases of the virus in hospitals on Friday morning and 89 Covid patients in intensive care.

On the booster campaign, Mr McCallion said it should hit the two million mark in the coming days.

A total of 1,869,667 boosters had been administered up until December 22nd, according to official figures.

Overall, the system was “working well”, he said. It will be closed for Christmas Day and December 26th, before reopening on the 27th.

From December 29th, the vaccination campaign will expand to include people aged 30 to 39 years through vaccination centres and pharmacies. Some GPs were already vaccinating this group, he said.

Those who received the one shot Janssen dose will also be offered the booster vaccine from December 29th, this will initially be through GPs and pharmacies and eventually through vaccination centres.

Children with underlying health conditions will be offered their vaccination from January 3rd, along with children where there are vulnerable people in their household. The portal for appointments will open on December 28th.

Meanwhile, Dr Brendan O’Shea, a Kildare GP and assistant adjunct professor in public health and primary care at Trinity College Dublin, has called on the public to observe public health measures and if they display any symptoms to immediately isolate and seek a PCR test.

“If people are sloppy or boozy schmoozy then it will spread,”he warned on Newstalk Breakfast.

“Get on to Unicef’s website. You don’t need more jumpers or aftershave. If you support the vaccine campaign you can give someone a real Christmas.”

The most important thing people could do at present was to slow the “rise of penetration of Omicron”. It was vital to act quickly and stop the spread of the new variant, he added.

“That’s the best way of handling this.”