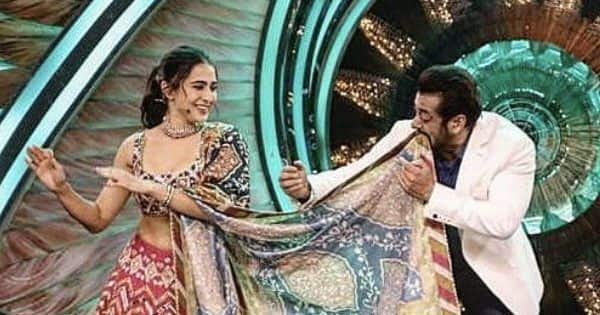 The Sunday’s Weekend Ka Vaar episode of Bigg Boss 15 saw Salman Khan getting angry over Shamita Shetty and Abhijit Bichukale’s ugly spat. While Shamita complained about Abhijit disrespecting her by calling her names, Abhijit defended himself by reminding how Shamita has also made fun of his surname. However, it was Sara Ali Khan who stole all the limelight and impressed the viewers with her wit, confidence and funny interaction with Salman Khan and the housemates. Also Read – Bigg Boss 15, Weekend Ka Vaar, Live Updates: Shamita Shetty apologises to Abhijit Bichukale

After the annoying interaction with the housemates, Salman got a smile on his face when Sara joined him on the stage to promote her upcoming film Atrangi Re. She began interacting with Salman by sharing some of her funny one-liners. Salman was so impressed with Sara’s wit that he even joined her in the madness and couldn’t stop hugging her for being fun and entertaining. She also said that she is currently shipping for TejRan on the show. Also Read – From Rupali Ganguly to Jay Bhanushali: 15 popular Bigg Boss contestants who failed to impress the audience

Later, Sara went inside the house to interact with the housemates and carried out different tasks in a fun way. She even called out Karan Kundrra for being too diplomatic when it came to choosing between Umar Riaz and Tejasswi Prakash. She also made Rakhi Sawant and Tejasswi to have a lavni dance face-off and Rakhi turned out to be the winner. Also Read – Salman Khan to replace Jacqueline Fernandez from Da-bangg concert after her intimate pictures with conman Sukesh Chandrashekhar went viral? Here’s what we know

Then, Sara carried out a verbal and physical dangal between Umar and Rakhi’s husband Ritesh. While the verbal dangal concluded in a draw, Umar became victorious in physical dangal where the two were to smash each other and drop one contestant from the platform.

Viewers were mighty impressed by Sara’s presence and lauded her for entertaining them amid the boring Weekend Ka Vaar episode. They said that they enjoyed a celebrity interaction on the show after a long time.

#SaraAliKhan was right, #KaranKundra is playing so safe. He is snake or meedhi churi. Right said Sara, sabse kamjor to karan hai wo apna mu marle?

Yes! #SaraAliKhan was good. After a long time,I enjoyed a celebrity interaction.

But did makers forget that this show is #BiggBoss15? We don’t want to see Sara cutting vegetables. We are not interested in her and Salman’s chemistry!@BiggBoss @ColorsTV @banijaygroup #NishantBhat pic.twitter.com/wDDrZIrGLU

#SaraAliKhan also ships Karan And Teja and #TejRan She is So Sick, Like all of us.

No one might have called Rakhi ji as
Rakhi ma’am.
This shows how gem of a person #SaraAliKhan is ❤
Respect .#BiggBoss15

Appreciation tweet for Sara. She conducted tasks in a fun way. #SaraAliKhan

And I just love #SaraAliKhan today ❤
She was so fun and I just like her energy ? and I loved whatever she said to kk ??? she was bang on.
I must say she is the best guest of this season. #BiggBoss15;

sara is soooo adorable and the comfort level she have with salman>>> She as well as salman kept hugging each other frequently..and her nameste darshako is truly iconic. best she’s.?✨#SaraAliKhan • #BiggBoss15 https://t.co/R5Di0BRDP3

Keep watching this space for the latest updates on Bigg Boss 15.