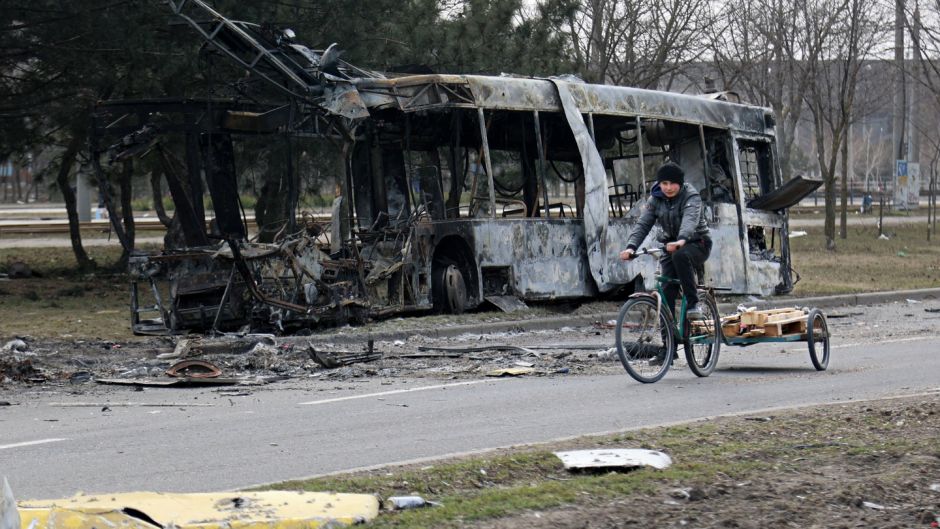 The Russian ambassador to Ireland Yuri Filatov has accused the Ukrainian authorities of utilizing “infamous images and fakes about Mariupol”.

The metropolis has been besieged by the Russian navy because the starting of March.

Independent observers say that giant components of town have been levelled by Russian shelling and a serious humanitarian disaster is obvious for 160,000 people who find themselves trapped there with out meals, water, shelter or electrical energy.

Writing a weblog on the Telegram web site, Mr Filatov accused Ukrainian “neo-Nazis” of utilizing civilians as human shields within the metropolis. He additionally accused the western media of ignoring shelling of civilians within the so-called Donetsk People’s Republic, which is just recognised by Russia.

The ambassador alleged that photographs of 20 individuals being killed by a missile in Donetsk had been faked and utilized in western media as proof of Russian aggression in opposition to Ukrainian civilians.

Mr Filatov acknowledged that the “special military operation” has been a “dramatic, traumatic period for many Ukrainians”, however he mentioned the struggling of the Russian talking individuals within the east of Ukraine has been occurring since 2014.

“It does not fit into the narrative, propagated in Europe, it is being suppressed in the media,” he wrote. “There are a lot of hard facts that need to be addressed to make a fair judgement of what has been going on in Ukraine.”

Mr Filatov alleged that the federal government which took over in Ukraine after the Maidan Revolution of 2014 was one composed of “Neo-Nazi and right-wing groups and parties”.

Ukrainian governments since then have cracked down on Russian language audio system and honoured Nazi collaborators through the Second World War, he acknowledged.

He accused Ukrainian president Volodymyr Zelenskiy, who’s Jewish, of co-operating with neo-Nazis when he got here to energy in 2019.

Mr Filatov repeated the assertion made by Russian president Vladimir Putin that the Ukrainian authorities was planning an offensive operation for the breakaway Donbass area in March.

“In order to prevent the genocide and to deny the Kiev regime any ability to inflict any further suffering on the people of Donbass, the decision was made to start a special military operation in Ukraine,” Mr Filatov wrote.

The Ukrainian authorities, he went on to state, has been facilitated by the West which has closed its eyes “to its ultranationalist, radical nature, with the sole purpose of creating hostile and aggressive entity on the border of Russia”.

The ambassador urged Irish individuals to contemplate that the “people of Donbass also deserve better and a peaceful life now and in the future, while racism, neo-Nazism and hatred should be resolutely rejected”.

Mr Filatov alleged earlier this month in a Russian tv interview that protesters had been “rough and really aggressive” on the nation’s embassy in Dublin.

In an interview with the state-owned Russia 24 tv station, Mr Filatov mentioned the state of affairs in Ireland is “frankly difficult”, and he accused the nation of being to the forefront of “anti-Russian events” within the European Union.

Blaming the Irish media for portraying an “absolutely tendentious picture” of the Ukraine invasion, the ambassador informed Russian viewers that the Irish public is hostile to “Russia and everything Russian”.

Earlier this week the Government introduced the expulsion of 4 Russian diplomats from its embassy in Dublin alleging that they had been engaged in espionage.