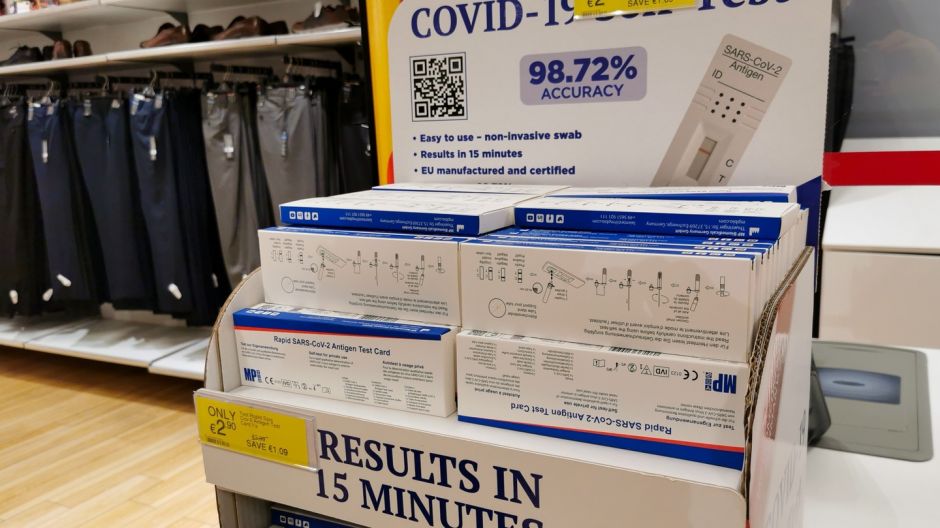 The wholesale cost of antigen test kits has fallen by more than 25 per cent in recent days following months of sustained price hikes.

Pharmacist Dave McFadden, who owns a shop on Prussia Street in Dublin 7, said that this week was the first time wholesale prices had come down since the kits started being sold in Ireland earlier this year.

“Before this week, the cost was climbing all the time and we were definitely being gouged by some suppliers,” he said. “But the picture has changed now and as the prices fall and we get new stock in, we have been able to sell the tests for less.”

The cost of a single test at McFadden’s is currently €6, markedly cheaper than the prices found in some pharmacies and other retailers across the country as recently as last week.

“It was the same with hand santitiser and the masks at the start of the pandemic Mr McFadden said. “The prices were ludicrous. Before Covid, we were selling them for 30 cent. And then suddenly we were paying more than €1.60 for a single mask, but then they fell back again.”

Meanwhile, the McCauley’s pharmacy chain of 37 outlets are selling single tests for €5, a reflection of the chain’s substantially larger buying power.

Last week Minister for Health Stephen Donnelly was set to bring proposals to Cabinet that would have seen subsidised antigen tests sold initially in pharmacies before being made more widely available. The memo was withdrawn pending more discussion and he confirmed on Monday that the plan has now been scrapped entirely.

Mr Donnelly said subsidies had been put on the table because prices of €8 and higher for one antigen test were “simply not affordable” for many people. However, he noted that that “since we have been looking at subsidisation, the prices have fallen.”

He cited examples of new low prices and suggested that the Government has “managed to achieve the price reduction without having to get into spending taxpayers’ money on a subsidisation.”

He said that the market had “done it itself. It has happened without having to spend taxpayers’ money on it. So it’s been a good result.”

Opposition parties disputed his assessment of the pricing arrangements and accused the Minister and the Government of abdicating responsibility for the issue.

What is not in dispute is the fact that prices have been falling. Late last week both Lidl and McCauley’s announced dramatic price shifts within hours of each other.

First out of the blocks was the pharmacy chain which announced it was selling single tests for €5, a drop of €1 on the previous list price while packs of five are being sold for €15, a reduction of €9 on the price they had previously sold for.

The company’s chief executive Tony McEntee said the chain had been able to roll out the discount because the wholesale price of the tests had fallen since the start of November.

He also pointed to a dramatic spike in sales with McCauley’s outlets having sold more than 80,000 tests in November, up from about 20,000 the previous month.

Lidl, which became the first supermarket chain to sell antigen tests earlier this year, also dropped its prices for tests over the weekend.

Last Friday, it announced that as of Saturday it would be selling single tests for €2.99, a price Lidl claimed was the cheapest on the market for approved kits.

“We believe that making these affordable and accessible for everyone is the right thing to do,” its chief executive JP Scally said.

As of Tuesday morning, single tests at Lidl were priced at €2.49 .

A spokeswoman said the additional reduction of 50 cent was “in reaction to the market”. She said the supermarket chain was seeing “exceptionally strong demand” for the tests.

While it has no multipacks in store at present, a delivery is anticipated later this week with new prices to be announced then. The price of a single test in Lidl shops in Germany is currently €2.95.

The other leading supermarkets hhave responded to the Lidl move, with Tesco dropping the price of its antigen tests to €2.99 from €3.99 and Aldi, Dunnes Stores and Supervalu now selling kits for broadly similar prices.

Less than 10 days ago, Supervalu was selling packs of 5 for €25. A spokesman said on Tuesday morning that it would be selling single kits across its network for €2.99 by Wednesday.

Meanwhile, Mr Price is selling kits for €1.99, announcing bullishly on social media that it was “not waiting for any subsidy from the Government”.