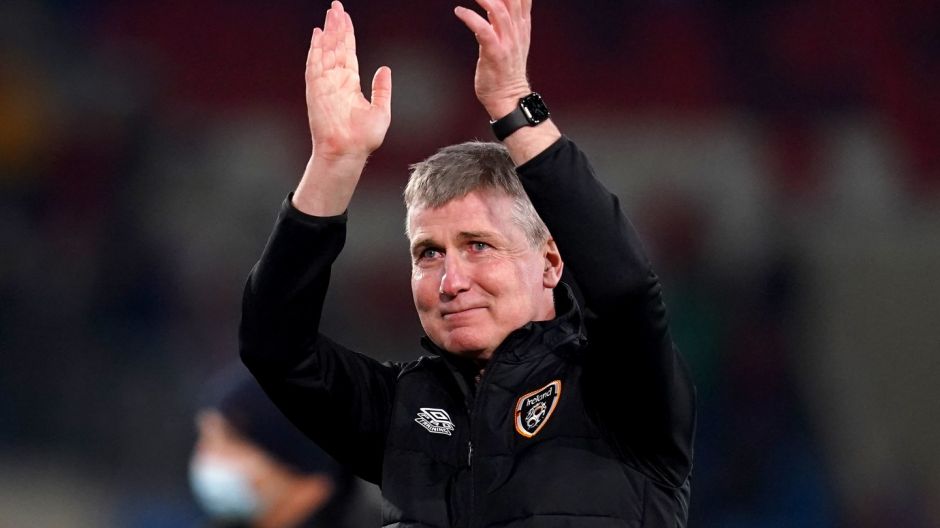 Packie Bonner and FAI President Gerry McAnaney have both refused to endorse Stephen Kenny as Republic of Ireland manager ahead of this month’s board meeting.

Kenny’s squad finished third behind Serbia and Portugal in a failed bid to reach Qatar 2022, following a bizarre run of misfortune that included defeat to Luxembourg and a draw with Azerbaijan in Dublin, before beating both nations away from home.

Wednesday’s big FAI announcement in cahoots with Uefa at Boswells Hotel was so seismic that McAnaney and Bonner, who chairs the association’s International and High Performance committee, declined the opportunity to provide an opinion on Kenny’s contract situation.

“It’s a progression, we’ve all been encouraged by what’s happened,” said Bonner.

“It’s no different when you go back to Jack Charlton’s day. Ray Houghton was 24 years of age when Jack took over. I was 26 and had nine caps. I didn’t have 60 or 70 caps. Paul McGrath, we were all in that middle group in terms of age.

“The emergence then of Roy Keane, Niall Quinn, Steve Staunton; those were the young players coming through.

“That is what I have enjoyed watching at the moment. If you back look at a couple of good results that they have had – one being the win away to Azerbaijan – that group of players has helped the younger ones. The emergence of Gavin Bazunu is fantastic, absolutely fantastic.”

When specifically asked if Kenny’s recent results are similar to Charlton’s squad building efforts in 1986 and 1987, Bonner instead spoke about the talent Brian Kerr sent up to Mick McCarthy’s senior squad.

“What I’ve witnessed is that [IRELAND]have grown in confidence, you can see that,” he said. “That took a little bit of time of course. They’re in a good place. They’re in place where they can compete now.”

So, has Stephen Kenny done a good job?

“I am not going to answer that,” Bonner replied, “because you are trying to get a line from me to say he is going to stay in the job or not.

“It will be solved. It’s not for me, I’m one of 12 board members. The first thing is we’ll do a review of the World Cup. We’ll discuss it as a board.”

The 61-year-old described an article in The Sunday Times last summer, which suggested he was sceptical about Kenny’s managerial abilities, as “speculation”.

“Anything that’s in the paper, that people don’t come and speak to me directly about, I’ve no response to any of that.”

Bonner was talking at the FAI’s launch of the “social return of investment in football” document, which provides “scientific “ proof that the sport has a €1.8 billion annual impact on Irish society.

“We’ve been talking to Government for 20 years, putting the case out there [for increased funding], but this gives us a numbers game, a scientific approach,” said Bonner ahead of petitioning Micheál Martin’s government and private businesses to dramatically increase investment in Irish team sports. Uefa also shared their findings with the IRFU.

However, if scientific evidence was all the Irish politician required to enact change, everyone would be driving electric cars as emancipated cows hide in thickets of rewilded countryside to escape the roving wolf packs.

The significance of this briefing taking place on Molesworth Street, so close to where the Football Association of Ireland was formed 100 years ago, was highlighted but what lingers in the mind is the FAI’s senior staff marching over from Buswells to Leinster House in April 2019, before the former chief executive John Delaney stone walled the Oireachtas committee.

The FAI did confirm that Fifa have been lobbied, with little success, to alter the Brexit rule blocking Irish players from signing with UK clubs until they turn 18. The chronic lack of soccer facilities in Ireland, as Damien Duff recently noted, makes it extremely difficult for club academies to become fully professional entities that can cater for the left behind talent.

“It is a big challenge, because we have always been in a situation where we had to rely a little bit on the players going away to England and Scotland,” said Bonner, who played 483 times for Glasgow Celtic.

“We need to discuss to see what alternative we are putting in here – is it up to the level? And it has to be up to the level, because if we don’t put a structure in place, which we have now, we have a structure, and we need to develop that structure going forward to compensate for what’s going to happen.”

Again, the specifics were sparse.