The Chennai Airport has stepped up its precautionary measures in the wake of the new Covid-19 variant, Omicron. The state government had already issued orders to the authorities of four international airports in Tamil Nadu — Chennai, Coimbatore, Madurai and Tiruchirappalli — to adhere to the latest guidelines issued by the Union government, which come into force today (December 1).

The state health secretary J Radhakrishnan chaired a meeting on Tuesday with the Union Health Minister on the state’s preparedness to tackle the new variant.

As per the guidelines issued by the Union government, the Chennai Airport authorities have made elaborate arrangements for the international passengers. An exclusive corridor has been created at the T4 terminal in the airport to screen passengers arriving from countries considered “at risk”. As per the authorities, the facility can accommodate 450 passengers at a time.

The facilities for the registration for RT- PCR tests, sample collection and payment, are provided at the same level. “An exclusive space is earmarked for each facility to rule out any possibility of crowding and to ensure smooth movement inside the facility,” the authorities said. 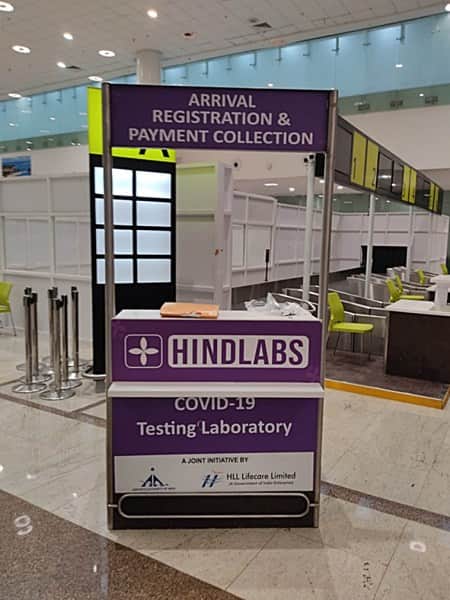 Other facilities at the T4 terminal include Food and Beverage (F&B) outlets, baby feeding rooms and a money exchange facility. Amenities like entertainment screens, free Wi-Fi, free telephone and vending machines are also present in the corridor. Information displays with the latest guidelines are in place to inform arriving passengers.

Chennai Airport Director Sharad Kumar told indianexpress.com that there has been no delay in arrival or departure due to the new protocols. “They (arrivals/departures) are arranged in a seamless manner to avoid any delays or inconveniences. Enough staff from Airport Authority of India, the airlines and other stakeholders are deployed apart from the conveniences provided at the corridor,” he said. The authorities informed that since early morning on Wednesday, a total of 88 samples of international passengers has been tested and none of them returned positive.

As per the new guidelines, the passengers are required to submit a sample for Covid-19 testing upon arrival and they need to wait for the result before leaving or taking a connecting flight. Following a negative result, they will have to home quarantine for seven days. They will be retested on the eighth day of arrival.

If they test positive, their samples would be sent for genome testing at the INSACOG laboratory network. They would be sent to a separate isolation facility and provided treatment as per the Standard Operating Procedures (SOPs). Their contacts would also be kept under home quarantine and strictly monitored by the state government.