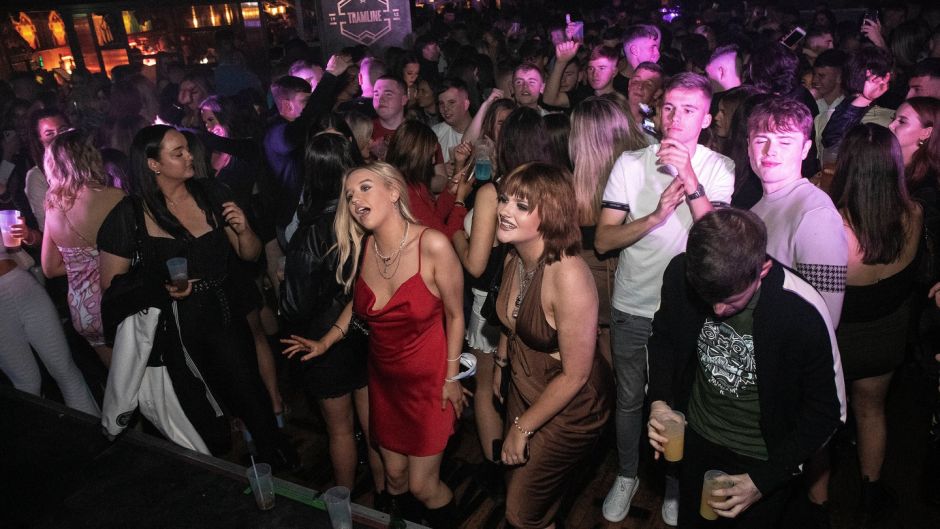 The rationale behind the Government’s decision to order the midnight closure of nightclubs defeated a lot of observers on the first night of its imposition.

Minister for Foreign Affairs Simon Coveney had explained on behalf of the Government that nightclubs remaining open after midnight was “risky behaviour” with Covid-19 numbers as they were at present.

However, the decision did not deter the 950 clubbers who packed into Tramline in Dublin city centre, nor scores of other people who queued up to get into Pygmalion nightclub on South William Street.

Copper Face Jacks, which tends to attract an older crowd, looked strangely forlorn at 9.30pm on Thursday night. In response to the Government announcement, Coppers simply brought forward its opening time to 6pm, but there was 10 people in the establishment by 8pm.

The Tramline show was sold out before the Government announced the midnight curfew. Just seven people sought a refund and those tickets were bought immediately when put back for resale, according to Tramline owner Ian Redmond.

The appetite for clubbing since October 22nd has been undimmed, he added. Tramline has been open for 22 nights since that date and all have been sold out. Tickets for Wednesday night, the last night of the 2.30am closing time, were all sold in an hour.

Mr Redmond said he believed the real motivation of the Government was most likely to hope that the sector would take the hint and close itself, thus obviating the need to pay income supports, while also avoiding the necessity of being seen to impose further restrictions.

“That’s how we honestly feel. We weren’t tempted to close,” he said. On the contrary he believes people will enter nightclubs earlier and stay longer as a result. He’s even thinking of having food for early arrivals.

There were 350 people inside the door of the nightclub by 9pm, all vaccinated and mad to party.

Rebecca Harte (18), a business studies student at Dublin City University, said clubbers are simply going to arrive early to leave earlier. “When the nightclubs stopped at 3am, we went home. Now there are going to be house parties. They can’t be monitored,” she said.

“It won’t affect us tonight, but it will affect us in the future,” said Sid Owen (19) who came from Bray for the night. “I finish work at 4pm. I’d rather not track into town. I’d rather stay in Bray.”

“We were in a rush to come out,” Eve said. “We had our last lecture at 4.30pm, only got home for 6pm, by the time we were changed, showered and back on the bus we were running late.”