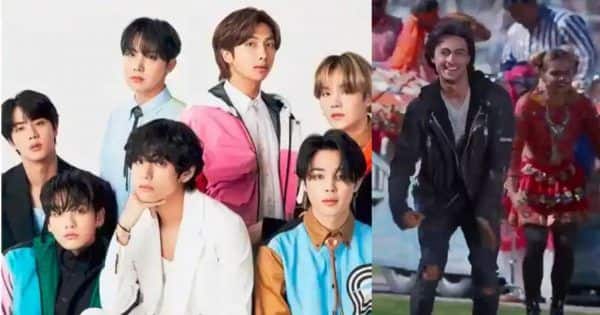 K-pop boy band BTS is famous not only for its songs but also for their choreography. The septet pulls off some of the hardest dance moves and all of them in-sync. But over the past few days, a video of them grooving on Nora Fatehi‘s song Kamariya has gone viral. Fans are tripping over this fan edit of BTS’ Jimin, Jin, Suga, J-Hope, Jungkook, RM and V are showing off their moves on Nora Fatehi’s song from Stree. Well, if you loved the edit and merger of BTS and Bollywood, here’s another one for you. Also Read – WHAT! Spider-Man aka Tom Holland CONFESSES he is a fan of BTS; ARMY are you listening?

Chogada from Loveyatri is a peppy number with beats of dhol and we must give brownie points to the maker of this video for finding the perfect BTS choreography to go with it. Check out the video below: Also Read – BTS: The reason why the Bangtan Boys never attend an after-party in the US will melt ARMY’s heart – deets inside

For those who missed out watching BTS x Kamariya, here it is. Also Read – BTS: Kim Taehyung’s birthday celebrations begin as HYBE’s neighbourhood gets dotted with ads — view pics

Meanwhile, the K-pop band recently featured in Vogue x GQ Korea magazine and got candid about a lot of things. BTS’ Jungkook spoke about ageing and was quoted saying that he feels a lot of pressure, “As I get older, I feel more pressure. I’m not particularly great; and I’m not that good and virtuous. I’m a very ordinary person, and I’m often scolded by the other members for my immature behaviour. If the world sees us as having a positive influence, then I need to try to adjust and match my actions and thoughts to those values.” On the other hand, J-Hope spoke about facing a dilemma in terms of musical path he chose.