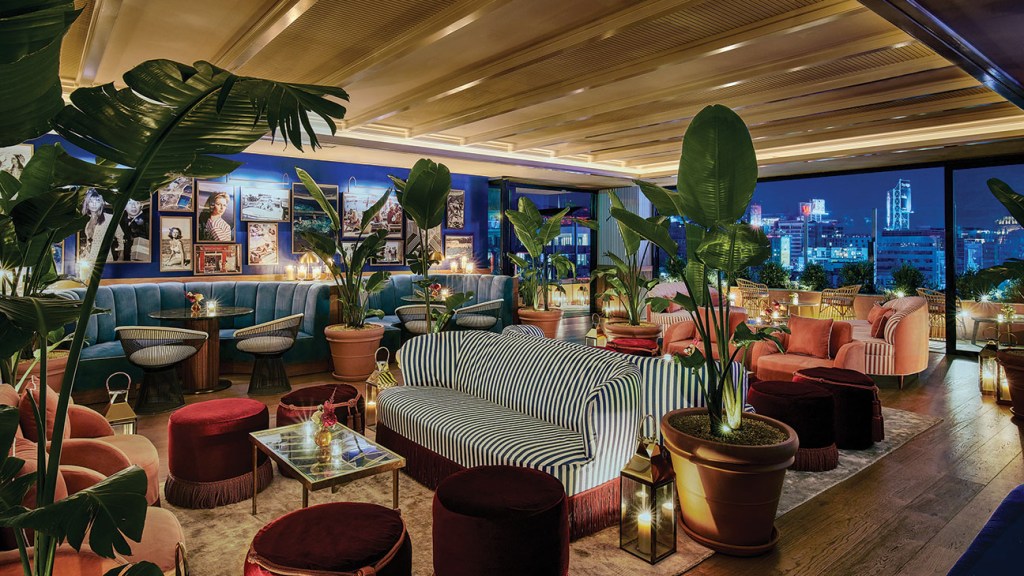 Over the decades, Hollywood has had its share of efforts at revitalization. Front and center was the massive Hollywood & Highland shopping center (opened in 2001), which didn’t exactly turn the area into a hip hood; the mall is now in the midst of a $100 million makeover and will be relaunched as Ovation Hollywood. The neighborhood also faced a tough time during the pandemic, with tourism largely disappearing in 2020.

Now, though, an area a bit to the east of Ovation — not far from where Netflix and Viacom opened L.A. headquarters in 2017 — is enjoying an upswing, in significant part due to the investments of one developer, Relevant Group. Centered on a few blocks around the recently inauspicious intersection of Selma and Wilcox avenues, it’s been branded with its own name, the Vinyl District (a moniker promoted by Relevant). Named in honor of Hollywood’s legacy as a home to music labels, recording studios and record stores, the mini-neighborhood is teeming with new, upscale developments, innovative hotels and exciting eateries.

The revitalization of the area — adjacent to where the beloved Hollywood Farmers’ Market happens every Sunday — truly began in 2015, with the opening of the funky, flirty, 70-room Mama Shelter Los Angeles (from $178), a boutique hotel from the France-based Accor Hotels. “Hollywood has almost always attracted lots of commerce — some sordid and some uplifting. I think Mama L.A. showed other hotels and restaurants that folks in Hollywood would come out and support a business such as ours,” says Mama Shelter general manager Andrew Jay.

It’s Relevant Group, though, that has fully bought into the district and propelled its transformation into the stratosphere. To date, the company has invested almost $500 million in the Vinyl District, developing three hotels, three dining concepts, two rooftop bars and an events space.

“We found an incredible opportunity to change the perception of the area, which has been historically known strictly as nightlife-driven, to usher in the next iteration of dynamic and sophisticated hospitality,” says Grant King, chief managing partner at Relevant Group. “We want to offer an incredibly versatile suite of world-class restaurants, bars and unrivaled hotel experiences that coalesces various demographics and backgrounds in one compound.”

The earliest of the Relevant projects is Dream Hollywood, an airy hotel with the vibe of a hip, upscale Apple Store, which opened in 2017. One of the draws of Dream Hollywood is The Highlight Room, a luxe rooftop restaurant and bar.

In August, Relevant unveiled the Thompson Hollywood (from $399), a sleek, modernist, luxury boutique hotel by the architect Steinberg Hart and designed by London’s Tara Bernerd. In the coming weeks, renowned chef Lincoln Carson — known for the short-lived Bon Temps in DTLA — plans to open Mes Amis, a French-style brasserie with a SoCal sensibility, in the Thompson.

A more affordable option is Relevant’s Tommie Hollywood (from $279), a cheerful hotel designed by the architectural firm Studio Collective, which opened in December. Tommie’s flagship restaurant, Ka’teen, is helmed by L.A. chef Wes Avila, formerly of Guerrilla Tacos, and is designed in the style of Mexico’s Riviera Maya. Another newcomer is the sleek Godfrey Hotel Hollywood (from $209), developed by Oxford Capital Group and opened in 2021 just south of Sunset on Cahuenga Boulevard.

Perhaps the most eye-catching of Relevant Group’s projects is Citizen News, a beautifully reimagined 1930 art deco standout (once home to the Hollywood Citizen-News newspaper) now transformed into a stunning events space by Rockefeller Kempel Architects. The building’s beauty convinced celebrated chef Evan Funke, of Venice’s Felix Trattoria, to locate Mother Wolf — his new “ode to Rome” — on the premises.

“What I love about Italian cuisine is illustrated environmentally. Imagine you’re sitting on the island of Capri, eating insalata caprese with the person you love, the ocean breeze on your face, sipping a crisp glass of falanghina,” says Funke. “That’s really hard to reproduce in any other place. So, when I first saw the renderings of the space that Mother Wolf sits in, the grandness presented an extraordinary opportunity to set the stage for something special and transportive. More so now than ever, guests are looking to be whisked away into the theater of dining out.”

Funke isn’t the only celebrated restaurateur to bet on the area. In October, executive chef Nigel Stephens opened Superba Food + Bread in the 1920s building once occupied by the beloved Cat & Fiddle.

In December, Grandmaster Recorders debuted in a former music studio of the same name where David Bowie and Stevie Wonder once recorded. It features New World Italian cuisine in a unique, historic space; if you have ever wanted to dine in a control room or recording room, here’s your chance.

“There’s no denying the shift in the Hollywood culinary and cultural landscape, and it will be felt with its full weight in 2022 as the vicinity starts to return to some normalcy,” says Grant Smillie, co-owner of Grandmaster Recorders.

So confident are chefs of the area’s future that 2019 James Beard award winner Tony Messina, Sicilian chef Enrico Merendino and Japanese chef Yoshiyuki Okuno have united to open the fusion restaurant Magari this year at 6115 Sunset Blvd. in the old Paley space next to Viacom’s office building. (A few blocks to the west, acclaimed chef Nancy Silverton opened The Barish chophouse inside the Hollywood Roosevelt in 2021.)

“The vibe is like a party,” says Mama Shelter’s Jay of the influx of new spots. “Mama L.A. arrived to the party when it started, and others are now showing up fashionably late. But we energize each other, and the interactions between businesses are themselves a source of further energy.”

While Netflix continues to expand in Hollywood and the nearby Cinereama Dome is scheduled to reopen this year, the neighborhood does face its share of challenges, including homelessness, crime and a previously subpar reputation. According to Jay, crime and grit have decreased in recent years thanks to the active involvement of the Hollywood Business Improvement District, which organizes security patrols, beautification and promotion. “This rapid pace of reinvention is going to continue,” predicts King.

Almost 100 years after its heyday — Buster Keaton, Harold Lloyd and Charlie Chaplin all shot films in an alley there — this section of Hollywood is poised to again make the area an upscale cultural destination for locals and tourists alike. “Given such a rich and diverse history, Hollywood is primed to be the most vibrant and transformative destination in the world,” says Davis. “It just needed the right catalyst to invoke the change that is transpiring today.”

Designed by global architecture firm Gensler, the rooms are the first addition of new dining space to the restaurant since 1955.

“It was really important for us when we were designing these rooms that we made sure to look into the past [of Musso & Frank] and bring the past with us into the future,” says Mark Echeverria, COO and CFO of Musso & Frank. “We kept a lot of the same architectural and design elements that you already see in the existing dining rooms.” (The restaurant closed over the holidays because of the omicron surge but is set to reopen Jan. 11.)

Featuring wood paneling and murals on the upper walls, the new rooms include an intimate dining space and VIP wine room, along with larger rooms to host industry events for up to 50 people. — SYDNEY ODMAN

This story first appeared in the Jan. 12 issue of The Hollywood Reporter magazine. Click here to subscribe.