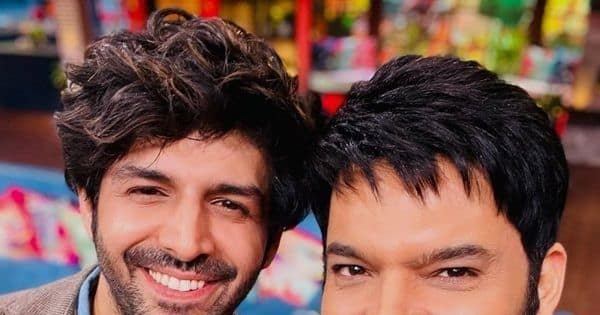 Kartik Aaryan has been the talk of the town thanks to his relationship rumours with his costars, be it with Sara Ali Khan in Love Aaj Kal or Ananya Panday in Pati Patni Aur Woh. The actor had earlier said that he remains unfazed with the link-up rumours but they haven’t stopped following him at all. So when Kartik visited The Kapil Sharma Show to promote his upcoming film Dhamaka along with his costar Mrunal Thakur, he faced a rather tough question from the ace comedian. Also Read – Kartik Aaryan’s Dhamaka co-star Mrunal Thakur DATING Kumkum Bhagya co-star Arjit Taneja? Here’s what we know

When Kartik made an entrance on stage, Kapil enquired him about his relationship status. To which, Kartik smartly replied saying, “Woh kaunsa gana hai? ‘Chupana bhi nahi aata, Batana bhi nahi aata.’ Both Kartik and Kapil broke into laughter. Also Read – Bunty Aur Babli 2, Dhamaka, The Wheel of Time and 5 more theatrical and OTT releases this week that’ll leave you spoilt for choice

Then Kapil moved on to his true or false segment and asked Kartik if he really falls in love with his costars or they are just meant to create a controversy during the film promotions. Kartik turned red upon hearing the question and remained speechless with an awkward smile on his face. Also Read – Dhamaka star Kartik Aaryan stops by Chinese van on way back from Bigg Boss 15 sets, enjoys meal on his Lamborghini’s bonnet – watch viral video

Kartik, who plays protagonist Arjun Pathak in the upcoming movie Dhamaka, shared how the entire movie was completed in just 10 days. He also revealed how he did not know that this was the plan to complete the film in 10 days.

“Actually, sir (Ram Madhvani) told me about this later that this was his way of working. I did not know about the timeline. He told me later that he has divided the film into chapters like chapter 1, chapter 2, chapter 3, like that nine chapters have been divided and within nine to 10 days the shoot will be over. So I was shocked at first! I did not sign a short film to be shot in nine to 10 days, I signed a feature film. So he said I shoot like this and because of this the thrilling experience went up even more,” he said.