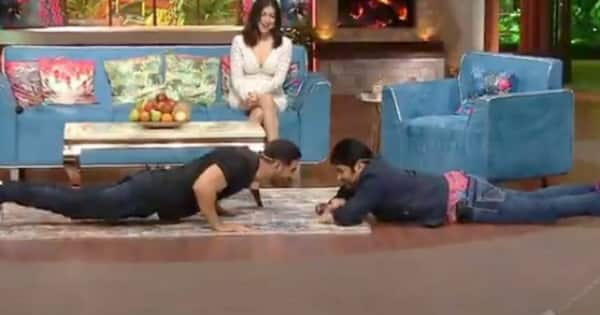 Recently on The Kapil Sharma Show, John Abraham and Divya Khosla Kumar promoted their recent release Satyameva Jayate 2. The film’s director Milap Zaveri had also joined John and Divya for the promotions on one of the most-watched comedy TV shows. It was yet another laughter riot of an episode. During the episode Kapil Sharma, the host asked John Abraham to share some tips on how to lose 10 kgs weight in a month. The darling that he is, John instantly obliged and said that he would share a proper diet plan for the same. Also Read – Satyameva Jayate 2 box office collection day 4: John Abraham starrer witnesses a small spike on Sunday but not enough to save a sinking ship

Adding to it, Kapil joked around saying that everyone should see his stardom and take notice of the fact that John Abraham is his dietician. This left everyone in splits of laughter. And that’s not it, we also saw John and Kapil taking up the push-up challenge. You can guess who would have won. It’s none other than fitness freak John. Kapil, on the other hand, chose to sleep instead of performing push-ups. Also Read – Worst dressed celebs of the week: Shilpa Shetty, Nushrratt Bharuccha, Mahima Makwana’s bland sartorial outings will make you yawn — view pics

John and Kapil also discussed the recent demise of Kannada superstar Puneeth Rajkumar. He was a fitness freak too. Kapil asked John to share advice on the proper workout, supplement intakes and more. The Pathan actor put emphasis on maintaining a proper diet. He also added that a half-an-hour or a 45-minute workout is enough for any individual. We also saw Kapil complimenting John for being a vegetarian and being so fit. Also Read – Kapil Sharma’s mom makes a revelation about Ginni Chatrath proving they’re pure ‘Saas-Bahu’ goals

Kapil also pulled Divya’s leg whilst on the show. Krushna Abhishek and Kiku Sharda were seen pulling pranks on the trio as well.