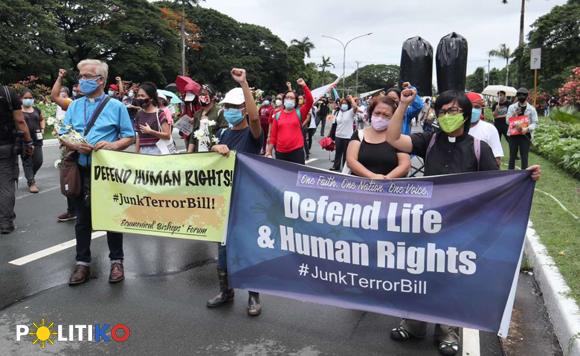 The House of Representatives on Monday approved on third and final reading a measure defining the rights and fundamental freedoms of human rights defenders (HRDs).

House Bill 10576 also seeks to declare the state’s responsibilities, and the institution of mechanisms for the protection and promotion of the rights and freedoms of HRDs.

No one objected to the passage of the measure, which received 200 favorable votes.

The bill defines a human rights defender as “any person, who individually or in association with others, acts or seeks to act to protect, promote, or strive for the protection and realization of human rights and fundamental freedoms and welfare of the people, at the local, national, regional, and international levels.”

Albay Rep. Edcel Lagman, principal author of the bill, said the enactment of the Human Rights Defenders Act “will put an end to the prevailing impunity on the extrajudicial killings and extreme harassments of HRDs.”

The bill embodies the rights and fundamental freedoms enshrined in the United Nations Declaration on Human Rights Defenders such as the rights to form associations and to peaceful assembly; represent and advocate; privacy; effective remedy and full reparation; and freedom from intimidation, reprisal, defamation, and stigmatization among others.

The measure also prohibits the public authority offender from invoking the presumption of regularity in the performance of duty which presumption is commonly used as a veneer to conceal accountability for violation of human rights and freedoms.

An identical bill authored by Sen. Leila de Lima is pending in the Senate.

Members of Makabayan bloc also lauded the passage of the measure.

“Human rights defenders have an essential role in protecting and promoting human rights in our country. In return, we must protect them and ensure their freedom and security so they can perform their duties,” Brosas added.

Kabataan Rep. Sarah Elago on the other hand reiterated the need to intensify the campaign to stop political persecution, judicial harassment, and all forms of attacks against HRDs.