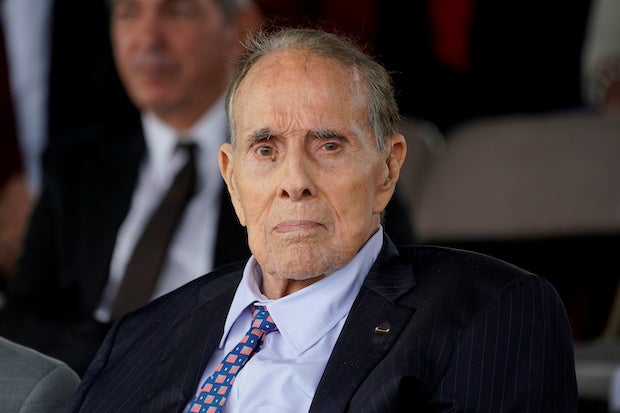 WASHINGTON — Bob Dole, who overcame grievous World War II combat wounds to become a pre-eminent figure in US politics as a longtime Republican senator from Kansas and his party’s unsuccessful 1996 presidential nominee, died on Sunday. He was 98.

Dole, known for a wit that ranged from self-deprecating to caustic, died in his sleep, the Elizabeth Dole Foundation said. Dole announced in February that he had been diagnosed with advanced lung cancer and would begin treatment.

“It is with heavy hearts we announce that Senator Robert Joseph Dole died early this morning,” the foundation said in a statement on Twitter. “He had served the United States of America faithfully for 79 years.”

Dole, known for referring to himself in the third person, made a classic American journey from the poverty of the Great Depression of the 1930s, through World War Two battlefields to the corridors of power with stoic Midwestern dignity.

He represented Kansas in Congress for 35 years: 1961 to 1969 in the House of Representatives and 1969 to 1996 in the Senate. Dole helped shepherd Republican President Ronald Reagan’s legislative agenda as Senate majority leader in the 1980s and spearheaded important legislation of his own.