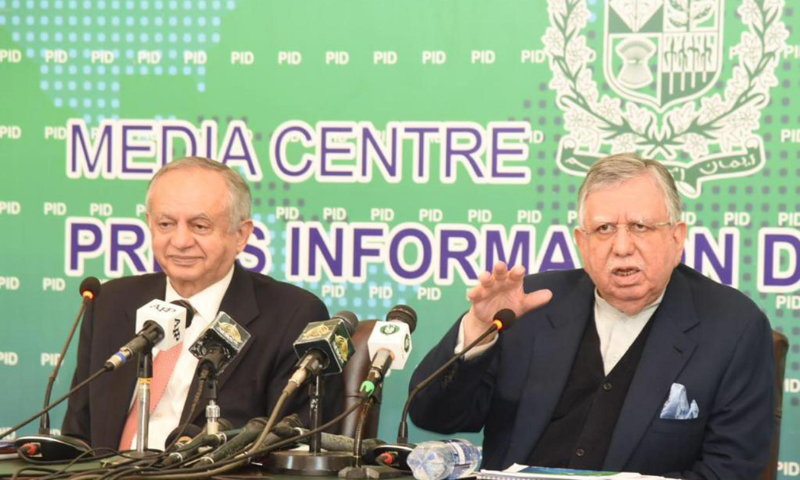 • Concedes uncertainties in market due to inflation, currency depreciation, interest rate hike
• Reassures people, markets that difficulties will subside in a few months
• Non-essential imports to be banned for about seven months
• PM’s aide says exchange rate should not be over Rs166-167 per dollar

ISLAMABAD: Adviser to the Prime Minister on Finance and Revenue Shaukat Tarin on Friday conceded that the recent economic uncertainties were caused by external factors, fault lines in certain monetary and government policies and their exploitation by market players.

He, however, sought public patience for a couple of months and regulatory action against banks to cool down inflation, stabilise exchange rate and end uncertainty in the market.

Speaking at a joint news conference with PM’s Adv­iser on Commerce Abdul Razak Dawood, Mr Tarin tried to reassure people and markets that the economy was on a growth path and the difficulties of the lower-middle urban class would subside in a few months.

“There is no need to worry, look at the fundamentals. The only permanent is that the economy is growing. The increase in taxes is not only because of imports, it’s all across, there is 32pc growth in income tax,” he said, adding that the national economy was getting stronger by the day as agriculture, services, industry and construction were growing.

He said cash margins had been applied to import non-essential items and now the government would impose regulatory duties as well.

The adviser said the imp­ort of non-essential imports, like completely built units (CBU) of vehicles, would be banned for six to seven months and the supplementary budget for withdrawal of Rs350bn worth of tax exe­mptions would take about 10 days to reach the parliament in the shape of a bill as the presidential ordinance was not acceptable to the International Monetary Fund (IMF).

He conceded that there were uncertainties in the market because of double digit inflation, currency depreciation, interest rate hike and higher import bill, which was not the situation at the time of the budget five months ago.

He said the withdrawal of tax exemptions would not necessarily add tax burden on these sectors as the IMF wanted the tax distortions to be removed while the higher revenue collection could be diverted to such sectors through targeted subsidies.

He said all these commitments had been made last year and he was able to reduce this fiscal burden by 50pc.

The adviser believed that the real effective exchange rate (REER) should be no more than Rs166-167 per dollar and about Rs10 higher value was because of speculators and the role played by some banks.

“They should not do this,” he said, adding that he had shared data on such activities with the State Bank of Pakistan (SBP) governor who earlier did not believe the banks were involved in such profit taking.

“Hopefully, you would see some action soon. I would not like to talk more on the issue,” he said.

On the other hand, he said the increase in discount rate to 8.75pc by the SBP and related direction that monetary policy frequency had been reduced from eight to six weeks and may be further reduced to a month also created some disquiet.

Based on this direction along with inflation at 11.5pc, the market anticipated further increase in discount rate and expected T-Bill’s rate to go up further and hence the market players increased their pricing because these issues ultimately raise the cost of doing business.

The pick-up of treasury bills by the government at 10.75pc reinforced this sentiment and the market reacted accordingly.

The PM’s aide on finance said inflation and import bill were interconnected and had external reasons of international commodity prices, otherwise domestic produce and perishable items had inflationary rate of about 3-4pc.

International fuel prices including that of petroleum products, LNG, coal, steel and edible oils had a major impact both on inflation and import bill.

Giving the breakdown, he explained that import bill was only $1.4bn higher than previous months. This included $252 million incremental impact of raw material import which was a good sign as it showed that the economy was on the wheels.

The biggest additional burden of $508 million was on account of petroleum group mainly because of higher prices.

He conceded that there were fault lines in the government policy as local refineries operated at low capacity and refined products were being imported.

“This should not have been happening. This is a fault line and we are working on it,” he said, adding that higher furnace oil imports were also because of gas shortage and higher LNG prices.

The adviser on finance said the third major import factor was $400 million worth of Covid-19 vaccines, which was funded by the World Bank and the Asian Development Bank. Abdul Razak Dawood, on the other hand, put the cost of vaccines at $350 million.

Mr Tarin said the $134 million impact was because of food and edible oil, adding that fuel prices were witnessing a pushback in the international market and hopefully LNG price would also fall. However, he ruled out any reduction in the price of edible oil in the near future.

The adviser said India and Bangladesh also faced sudden jumps in import bills but their impact on inflation was relatively lower because they did not have to make energy price adjustments which had been on hold for long.

Mr Tarin said prices of all domestic edible items were lower than last year and had he followed the same taxation strategy, petroleum should have cost Rs175 per litre instead of Rs143-145 at present.

Abdul Razak Dawood said the country’s exports were showing a record increase and growing month after month while increase in imports was due to the raw material, which showed the economy was growing.