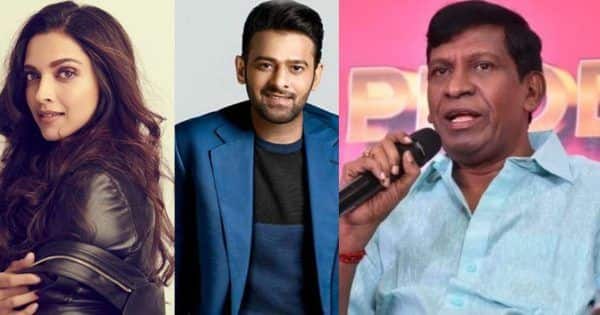 It was a happening day as far as the South film industry is concerned. If you were busy and missed any important updates, don’t worry. As the day is about to end, we are here to help you with our trending South news today. Deepika Padukone, Prabhas, Amitabh Bachchan, Nani, R. Parthiepan and others are a part of our top South news today. So sit back and read on to know more about today’s South newsmakers. Also Read – Nora Fatehi sets a thirst trap as she flaunts her envious curves in a body-hugging dress — view pics

Deets about Prabhas, Amitabh Bachchan and Deepika Padukone’s film with Nag Ashwin
Project K is one of the most anticipated films. The film is a sci-fi film. It has a robot and a couple of futuristic elements. Now, we can’t wait to know more about this. Also Read – Why are Sushant Singh Rajput fans trending boycott Ranveer Singh’s 83?

Tamil actor Vadivelu hospitalised after testing Covid positive
Tamil comedian and character actor Vadivelu was admitted to a private hospital in Chennai after he turned Covid-19 positive. He had returned to Chennai from London on Thursday where he had attended some functions. He was tested at the Chennai international airport and on Friday, he tested Covid-19 positive. Doctors attending to him said that his health condition was stable and he was recovering well.

Nani starrer Shyam Singha Roy faces release-date problems in AP
It is reported that the Andhra Pradesh government is going extremely hard on the theatrical releases in the state. In the wake of unprecedented rides on the movie theatres in the state of Andhra Pradesh, several cinema halls have now been seized by the local authorities, quoting multiple reasons. As Nani and Sai Pallavi-starrer ‘Shyam Singha Roy’ hit the screens on Friday, the seizure of theatres has caused a huge loss to the distributors and the businessmen.

Actor-filmmaker R. Parthiepan gets UAE Golden Visa
Tamil actor-filmmaker R. Parthiepan has become the latest entry on the list of Indian actors and film personalities to receive the Golden Visa from the United Arab Emirates (UAE). The coveted recognition was presented to the National Award-winning filmmaker by officials of the UAE’s Federal Authority for Identity and Citizenship. Parthiepan expressed his gratitude to the Dubai government for awarding him the visa.

Pushpa: The Allu Arjun-starrer joins the ‘two-million-club’ in the US

Allu Arjun’s Pushpa: The Rise is being screened with the house full occupancy in both domestic and international circuits. It was earlier reported that during ‘Pushpa’ one-week run, this action thriller collected a gross of around Rs. 196 crores at the box office. Now that the makers have announced the movie’s huge success in the USA, ‘Pushpa: The Rise’ is said to have joined the two million dollar club in the United States, in terms of collections. A tweet on the official Twitter account of the film, which goes by the handle @PushpaMovie shared that it is the first south Indian film of 2021 to hit the Rs 2 million benchmark in the US.