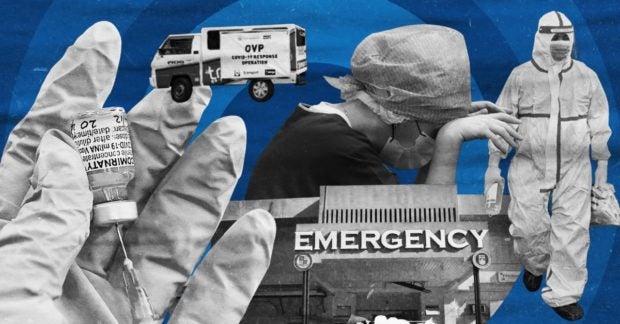 MANILA, Philippines—The Philippines started 2021 with 26,677 active cases of COVID-19, with 1,765 patients recorded on January 1. But as of December 20, the country has only 9,592 active coronavirus infections, including 263 new cases.

While the figures could suggest an improvement in the pandemic situation in the Philippines at the conclusion of 2021, there were hurdles throughout the year—case surges in March and April and August and September driven by more transmissible variants of SARS Cov2, the virus that causes COVID-19.

INQUIRER.net takes a look at the highlights of the pandemic in the Philippines in 2021, including case surges, low resiliency ranking, impacts of new coronavirus variants and vaccination coverage.

From January to February, the country had only around 1,000 to 2,000 daily new COVID-19 cases. The low average of new cases at the start of the year even prompted the Department of Health (DOH) to say that holiday festivities in 2020 had no significant effect on the number of infections.

Read: PH not much affected by post-holiday surge of Covid-19 cases, says DOH

But with the detection of the more transmissible Alpha and Beta variants, cases began to increase at the beginning of March to over 3,000, until it reached 10,016 on March 29. On April 2, new cases further swelled to 15,310 before easing to less than 10,000 from May to July.

However, new COVID-19 cases again surged in August and September due to the highly contagious Delta variant. The highest daily record was logged on September 11 with 26,303 new cases among 185,706 active infections.

As higher cases were reported, more patients also filled up hospitals. As of September 11, occupancy for intensive care beds was 76 percent, while utilization of ward beds was 73 percent. Both figures were considered high risk under DOH metrics.

With the decline in daily cases—even reaching 200 to 500 so far in December—health care capacity later improved to safe levels. DOH data as of December 20 showed that only 21 percent of ICU beds, 22 percent of isolation beds and 11 percent of ward beds are currently occupied. The Philippines is currently classified minimal risk for COVID-19.

But despite lower COVID-19 cases in the last quarter of the year, the country remained at the lowest spot in an international report that measures the resilience of economies during the pandemic.

According to the November report of Bloomberg, the Philippines was still at the bottom of 53 countries with a resilience score of just 43.1. It was, however, a bit higher than its score of 40.5 in October. In contrast, the United Arab Emirates, which was on top of the list, had a score of 73.2.

November was the third consecutive month that the Philippines ranked last in the resiliency report. Bloomberg noted that the country had given out only 73.2 vaccine doses per 100 people—a “key barrier” to improving its score.

Aside from vaccination coverage, the ranking also considers virus containment, severity of lockdowns, quality of health care, progress toward restarting travel, and overall mortality throughout the pandemic.

The consistent low resilience scores, obviously, did not sit well with government officials.

For Malacañang, the reports had “little consideration” of specific situations in countries evaluated. Health Secretary Francisco Duque, called the reports “unfair” and “skewed” to a high vaccination rate. Interior Undersecretary Jonathan Malaya, spokesperson of the Department of Interior and Local Government, said the ranking was “biased towards Western countries.” 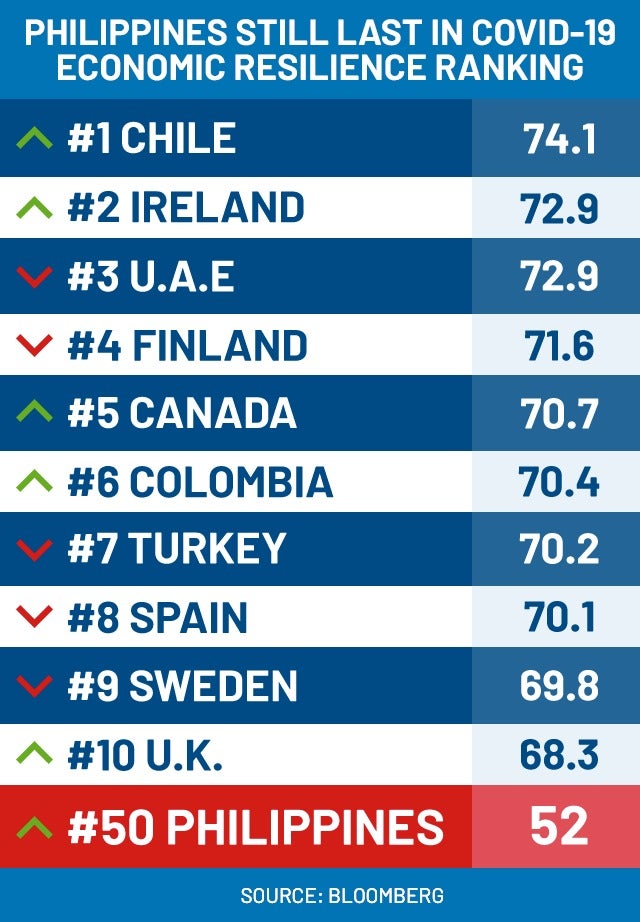 The year 2021 also saw the emergence of new SARS CoV2 variants of concern (VOC) that are more transmissible and were believed to affect the efficacy of available vaccines.

The first cases of the Beta variant from South Africa, meanwhile, were confirmed by the DOH on March 2.

The earliest detected case of the highly contagious Delta variant, which was blamed for the surge in cases in August, was from a sample collected on March 31. After its initial detection, the variant quickly spread and became the most dominant in the country since August.

Read: Delta now most dominant variant in PH — WHO

Just when the surge driven by Delta subsided, the DOH also confirmed the first two cases of the Omicron variant from travelers from Japan and Nigeria who arrived in the Philippines on December 1 and November 30. A third case was later confirmed from a returning Filipino from Qatar who arrived on November 28.

Dr. Rabindra Abeyasinghe, country representative of the World Health Organization, said he believed that the Omicron variant, which has around 50 mutations overall including up to 32 in its spike protein, will most likely replace Delta as the most dominant variant.

Read: WHO: Omicron will ‘most likely’ replace Delta as dominant variant 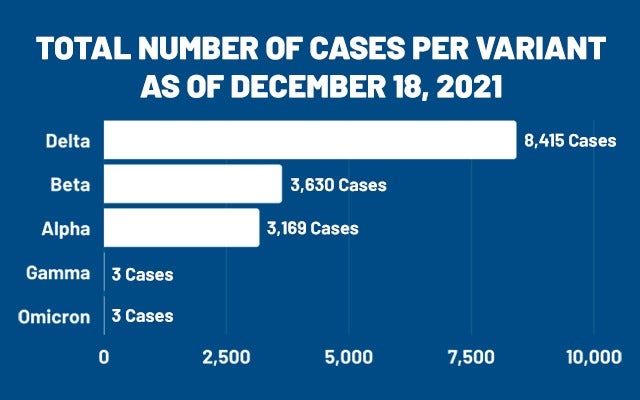 Health authorities have so far detected a total of 8,415 cases of Delta, 3,630 cases of Beta, 3,169 cases of Alpha, three cases of Gamma variant, and three cases of the Omicron variant in the Philippines as of December 18.

With the emergence of more transmissible variants, health authorities have reiterated the importance of getting vaccinated and receiving booster shots.

Since the vaccine rollout in March, the Philippines has already administered over 100 million shots as of December 19. Over 43 million people have been fully vaccinated, 56 million doses were provided as first jabs, and 1.1 million doses have been administered as boosters or third doses.

Citing the Our World in Data, the DOH said the Philippines ranked fourth among countries with the highest number of jabs in a single day, with 2.7 million shots administered on November 29, the first day of the “Bayanihan, Bakunahan” or the mass vaccination drive of the government.

The country’s population as of May 2020 was 109 million, based on a proclamation signed by President Rodrigo Duterte in July this year.

The government aims to fully vaccinate 54 million Filipinos aged 12 and above by yearend.