CEBU CITY, Philippines – Cebu City’s popular night market might reopen soon if a majority of the vendors will be fully vaccinated, and strict health protocols will be set in place, Mayor Michael Rama said on Wednesday, December 1.

“Tanan ablihan basta tanan mabakunahan (All of it will be opened so long as everyone is vaccinated),” the mayor said during a press conference on Wednesday.

Prior to the pandemic, the night market was a popular destination during the holidays for bargain-hunting shoppers looking for affordable Christmas presents.

Vendor groups, which have experienced a significant loss of income due to the closure of the market, have petitioned for the reopening of the night market to the city’s Prevention, Restoration, Order, Beautification, and Enhancement (PROBE) Team.

The petition was later endorsed to the city’s COVID-19 Emergency Operations Center (EOC).

Cebu City Councilor Joel Garganera, head of the EOC, said they were also open to bringing back the night market.

“[A]ctually it’s a lot better and safer compared to the malls,” Garganera said. “It’s open air, we just need to put the stalls not too close to each other, manage the observance of the health protocol from the organizer themselves and monitored by EOC task force,” he added.

Garganera also agreed that all vendors should be fully vaccinated.

In March 2020, late Mayor Edgardo Labella suspended operations at the night market when the general community quarantine was implemented in the city.

The city considered reopening the night market in November 2020 but was later thumbed down by Labella due to the risk of COVID-19 infection.

This time, however, the city was more confident as vaccines were widely available and the city’s COVID-19 cases remained low despite the lack of restrictions in the city.

The city also has been able to maintain a positivity rate far below the 5% World Health Organization threshold, indicating that a locality has the pandemic under control for over four weeks. 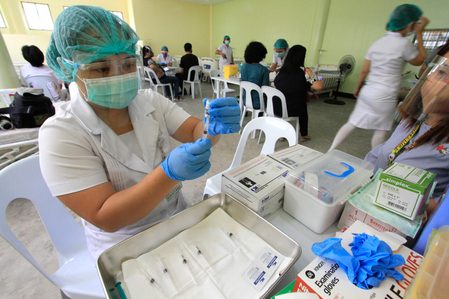 Currently a total of 433,134 Cebu City residents are fully vaccinated out of 964,000 total residents, or about 44% of the total population.

The percentage of vaccinated individuals over the eligible population is at 45.59%.

Despite the promising COVID-19 statistics in Cebu City, Rama does not want to be complacent and are preparing for a possible surge brought about by new variants of concern such as the Omicron variant and said they would first

The mayor will issue the safety guidelines for the night market’s return in the coming days. – Rappler.com