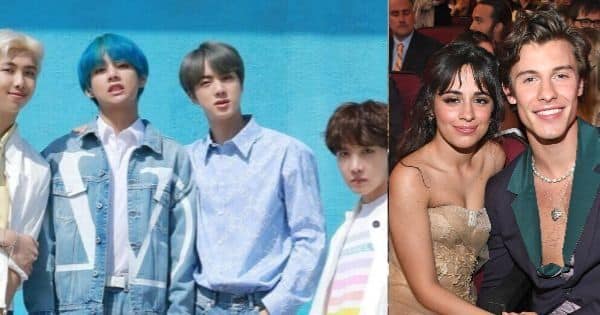 It’s that time of the day when we present to you our trending Hollywood news today. BTS, Camila Cabello, Shawn Mendes, Will Poulter, Jeremy Renner, Paul Rudd, Keanu Reeves and others are a part of our top Hollywood news today. So read on to know more about today’s Hollywood newsmakers. Also Read – BTS: Did you know the K-pop band is the only group that debuted in 2013 and has achieved THIS feat?

BTS avoids paparazzi and crazy fans
BTS members reached the US today for the American Music Awards. Fans and media persons word were waiting to get a glimpse of the members but they chose to take the private exit from the Los Angeles airport and reached their hotel. Also Read – WHAT? Here’s why BTS’ airport security reminded all ARMYs of Netflix’s Squid Game

Camila Cabello and Shawn Mendes announce separation
Shawn Mendes and Camila Cabello have called it quits after being in a romantic relationship for 2 years. They shared a not on Instagram and wrote, They wrote, “Hey guys, we’ve decided to end our romantic relationship but our love for one another as humans is stronger than ever. We started our relationship as best friends and will continue to be best friends. We so appreciate your support from the beginning and moving forward.”

Will Poulter says he struggled with his mental health during pandemic
Actor Will Poulter shared that he found things tough during the pandemic, and he knows “many people” felt the same amid lockdowns and other restrictions. The 28-year-old actor told E! News: “To be completely candid with you, I really struggled with my mental health like many people did throughout the pandemic.” The ‘Dopesick’ star said his role as Billy Cutler in the miniseries, created by Danny Strong and based on Beth Macy’s 2018 book ‘Dopesick: Dealers, Doctors and the Drug Company that Addicted America’, also proved challenging mentally, reports femalefirst.co.uk.

Jeremy Renner says Hawkeye character Kate Bishop is a real pain in the bu**
As Marvel Studios aims for a perfect year-end treat through the tightrope of Hawkeye’s bow, the fans of the studio’s greatest archer are set to witness the cinematic extravaganza on their screens. Jeremy Renner, who plays the eponymous superhero in the Disney+ Hotstar series, is set to embark on a daunting journey to go back to his family but his encounter with the outlaws seems to change the course of his journey in the post-blip world. Hawkeye teams up with a 22-year-old skilled archer and his biggest fan, Kate Bishop played by actor Hailee Steinfeld, to unravel a criminal conspiracy. Recently, Jeremy spoke about Kate Bishop’s character and gave a new perspective to his protege, he said, “I think he sees a lot in her. I mean, at first, she’s a real pain in the butt. But he learns to have a lot of respect and adoration for her, and then teach her and protect her.”