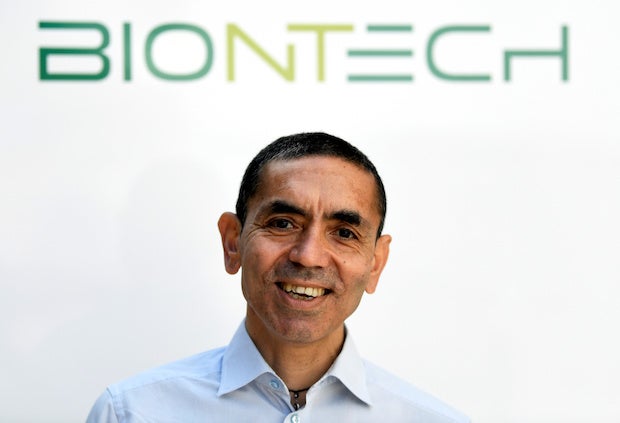 Lab tests are underway over the next two weeks to analyze the blood of people who had two or three doses of BioNTech’s Comirnaty vaccine to see if antibodies found in that blood inactivate Omicron, shedding light on whether new vaccines are needed.

“We think it’s likely that people will have substantial protection against severe disease caused by Omicron,” said BioNTech CEO and co-founder Ugur Sahin. He specified severe disease as requiring hospital or intensive care.

Sahin added he expects the lab tests to show some loss of vaccine protection against mild and moderate disease due to Omicron, but the extent of that loss was hard to predict.

The biotech firm is speedily working on an upgraded version of its vaccine, of which well over 2 billion doses have been delivered, although it remains unclear whether that is needed, he added.

Sahin said getting a third vaccine shot known as a booster will likely confer a layer of protection against Omicron infections of any severity compared to those with just a two-shot course.

“To my mind, there’s no reason to be particularly worried. The only thing that worries me at the moment is the fact that there are people that have not been vaccinated at all,” Sahin added.

BioNTech’s guarded confidence contrasts with a sense of alarm conveyed by the chief executive of rival vaccine maker Moderna, Stephane Bancel, who has raised the prospect of a material drop in protection against the new coronavirus lineage from current vaccines.

Sahin said antibodies brought about by vaccination could struggle to latch on to the new virus lineage, but he added that t-cells, another line of immune defense, were set to recognize the vast parts of Omicron’s spike protein that remain unchanged.

While antibodies bind to viruses directly and prevent infections, longer-lasting t-cells attack cells that have already been hijacked by the virus, warding off viral replication and severe disease.

Pfizer and BioNTech have already created versions of their established mRNA-based vaccine – based on the original virus found in China – to target the so-called Alpha and Delta variants, with clinical trials continuing.

Those efforts are not meant to yield commercial products but to establish a routine with regulators that will help speed up any future vaccine relaunch.

Sahin said that was why regulators would unlikely require testing on human volunteers and an analysis of their immune reaction for any Omicron-specific vaccine upgrade.

“The advantage is that we have been practicing this pit stop for months and if we change tires for real we will be able to say we’ve demonstrated this before for one variant and for two variants,” Sahin said.

He said he still expects a market launch with an initial batch of 25-50 million doses that would take about 100 days, provided regulators are satisfied.

Sahin would not be drawn on whether Omicron will become as dominant as the Delta variant. “But even if, that in itself is no reason to panic,” he said.

The EU drug regulator said on Tuesday it could approve vaccines adapted to target Omicron within three to four months if needed, but that existing shots would continue to provide protection.