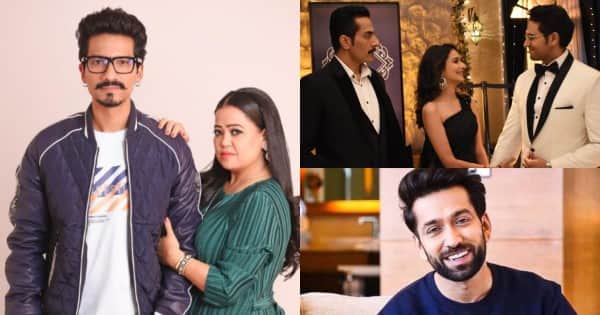 The last week has been quite exciting and scandalous for the television industry. There was a lot of drama and a lot of things that happened and it increased the excitement levels of the viewers. Right from comedian Bharti Singh announcing her pregnancy, Anupamaa fans not impressed by Malvika, Nakuul Mehta tests COVID-19 positive, and more happened this week. So let’s check out the top headlines that were made this week: Also Read – Anupamaa: Rupali Ganguly and Gaurav Khanna celebrate Christmas with Aneri Vajani – see pics

Bade Achhe Lagte Hain actor Nakuul Mehta has recently tested positive for COVID-19. The actor took to his social media and informed his fans about his health. He captioned the post as, “Since your boy feels less foggy in his mind today, quick health update, no one really asked for..Grateful for Will Smith, a barrage of medicines, YOU on Netflix, Modern Love Podcast on Spotify, Ali Sethi’s melancholic voice, some Christmas lights, my diary and my house lady’s warm meals to give me company as I take on the mantle of beating Covid! We shall overcome… ❤️?” Also Read – Bigg Boss 15, Day 83, Live Updates: Rakhi Sawant disrupts Karan Kundrra-Tejasswi Prakash’s intimate moment

Comedian Bharti Singh and husband Harsh Limbachiyaa expecting their first child. The couple is soon to welcome their little one into this world. They made the announcement on social media and their video went viral on the internet.

Imlie’s Aditya aka Gashmeer Mahajani to leave the show

Actor Gashmeer Mahajani aka Aditya in the hit TV show will soon be taking a break from Imlie. Gashmeer needs a break from the show to shoot for his upcoming film that’ll be releasing directly on an OTT platform.

Also Read: SAY WHAT! Imlie’s Aditya aka Gashmeer Mahajani to leave the show for THIS reason

Anupamaa TV show has been ruling hearts and TRP charts for many weeks. After Gaurav Khanna’s entry into the show as Anuj Kapadia, the fans were excited to watch the upcoming episodes, but the new entry of Aneri Vajani as Malvika (Anuj’s younger sister), hasn’t impressed fans.

Rakhi Sawant’s husband Ritesh has been eliminated from Bigg Boss 15 and post his exit, he has made some shocking revelations. He admitted that he is not legally married to Rakhi Sawant yet. He stated that he has filed for divorce from his first wife, however, she is yet to sign.