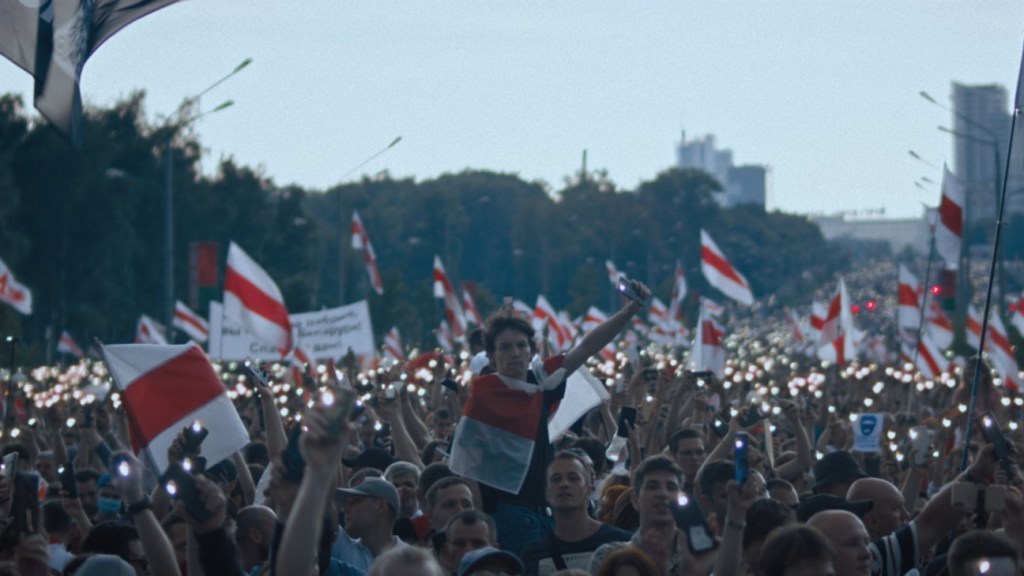 Courage, Aliaksei Paluyan’s critically-acclaimed documentary on the Belarus protest movement, has been acquired by European network Arte for France and Germany ahead of the film’s screening at the International Documentary Festival in Amsterdam (IDFA). Arte plans to broadcast the film in early 2022.

Paluyan’s on-the-ground view of events follows three members of an underground, and illegal, theater troupe as they join in with compatriots to resist President Alexander Lukashenko’s 26 years of dictatorship. After a contested election, thousands take to the streets to demand the President resign. The hope for change in what is often termed “Europe’s last dictatorship” was crushed when Lukashenko violently cracked down on demonstrators. The theater actors in the documentary now live in exile outside the country.

Lukashenko’s crackdown heightened tensions with western governments in Europe and the United States, who do not recognize him as the legitimate leader of Belarus. In May this year, Belarus ordered a Ryanair Flight flying through its airspace carrying the opposition journalist Roman Protasevich to force-land at Minsk International Airport. Protasevich was arrested and later officials released a video in which Protasevich “confessed” to having organized mass unrest in the country. His family said they believed the confession was forced and made under duress.

More recently, Lukashenko has been in a standoff with the European Union over a self-generated migrant crisis. Since the early summer of 2021, Belarus has been flying in refugees from the Middle East, and encouraging them to flee across the border to Poland. Most are stranded in the woods along the border, facing off against Polish security forces watch them from behind a razor-wire fence.

Courage premiered at the Berlin Film Festival this year and made its U.S. debut at L.A.’s Laemmle’s theaters earlier this month. Given the subject matter, the film is considered a potential dark horse for the Oscar race in the documentary category. Rise and Shine are handling world sales.