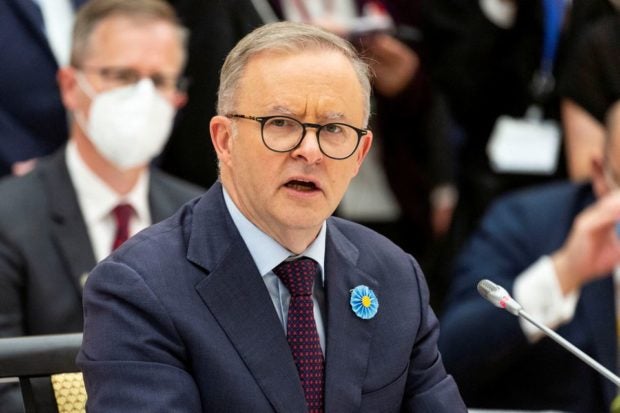 SYDNEY — China needs to lift its sanctions on Australia to improve relations, Australia’s prime minister said on Tuesday, as he welcomed as “a good thing” the first talks between ministers from the two countries in almost three years.

China is Australia’s largest trading partner and the biggest customer for its iron ore – its largest export earner – but diplomatic relations have been strained in recent years.

In imposing its sanctions, China listed 14 grievances with Australia ranging from its call for an international inquiry into the origins of the coronavirus, a ban on China’s telecommunications giant Huawei building a 5G network, and screening foreign investment for national security risks.

“It is China that has imposed sanctions on Australia. They need to remove those sanctions in order to improve relations,” Prime Minister Anthony Albanese told reporters in Brisbane.

Australia’s former government described China’s sanctions on its agriculture and energy commodities as “economic coercion”. Amid a years-long diplomatic freeze, Australian ministers have been unable to arrange calls with Chinese counterparts.

But Australia’s defense minister, Richard Marles, met his Chinese counterpart, Wei Fenghe, on the sidelines of a security conference in Singapore on Sunday, with Marles describing their hour-long talk as an “important first step”.

Albanese said it was “a good thing” the ministers had met and noted the importance of trade with China for Australia’s economy.

China’s foreign ministry said on Monday that Albanese had responded to a message of congratulations from Chinese Premier Li Keqiang on his election win last month, adding that it too wanted to see action for ties to improve.

“To improve China-Australia relations, there is no ‘auto-pilot’ mode. A reset requires concrete actions,” China’s foreign ministry spokesman Wang Wenbin told a regular press briefing in Beijing. He did not elaborate on the action China wanted.

Albanese declined to elaborate on what he had said to Li.

“I responded appropriately,” he told reporters.

What does Southeast Asia want from Australia?