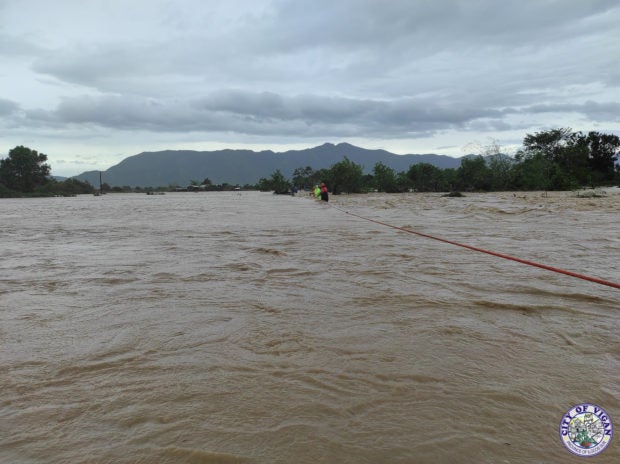 LAOAG CITY—The province of Ilocos Sur sustained around P580 million worth of combined damage to agriculture and infrastructure due to the onslaught of Severe Tropical Storm Maring (Kompasu) earlier this week, local officials said.

The coastal towns of Sta. Maria, Sta. Cruz, and Sta. Lucia were the hardest hit, according to Ilocos Sur Gov. Ryan Luis Singson during a press briefing on Wednesday.

He said the storm affected 7,053 farmers in the province where 3,467.77 hectares of rice, corn and high-value crops were lost or damaged.

At least 314 livestock were also gone after the storm, which damaged 87.92 ectaresa of fish cages and ponds, an initial report from the provincial government showed.

Singson said he will  place Ilocos Sur under a state of calamity subject to the availability of the final damage assessment.

He would also order all affected areas in the province to suspend the purchase of COVID-19 vaccines and use the funds instead to help disaster-stricken residents.

Five fatalities were reported in Sta. Maria town, three in Suyo town, two in Tagudin, and one each in the towns of Lidlidda, Sta. Cruz, and Salcedo.

Three were reported missing in the towns of Sta. Maria, Tagudin, and Sta. Cruz, the governor added.

Over 18,000 residents, or 4,426 families, in the province were displaced by Maring, with many of them appealing for donations, including ready-to-eat food, clothing and blankets.