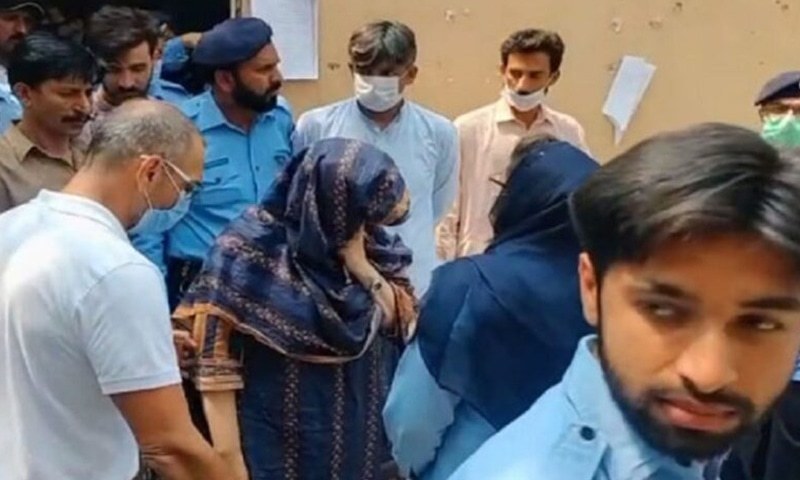 Zakir Jaffer and Asmat Adamjee, parents of Zahir Jaffer, who is the prime suspect in the Noor Mukadam murder case, approached the Islamabad High Court (IHC) on Wednesday seeking annulment of the sessions court’s order to indict 12 suspects in the murder case on Oct 14 (Thursday).

The petitioners are currently incarcerated at the Central Jail, Adiala Road, Rawalpindi.

Last week, the sessions court had fixed Oct 14 for the indictment of suspects in Noor’s murder case.

The court had last month set Oct 6 for framing charges in the case, but deferred it after the suspects filed fresh petitions, seeking certain documents along with the copy of the challan.

In the petition filed today, Zahir’s parents said they had submitted a plea before the additional sessions judge on Oct 6, seeking copies of the evidence, adding that Adamjee had also filed an additional plea urging the court to allow four weeks’ time for her counsel to prepare for the defence.

“But both the pleas were dismissed by the additional sessions judge in complete disregard of their constitutional and legal right to a fair trial and due process,” the petition added.

Zahir’s parents urged the IHC to set aside the Oct 7 orders of the sessions court and order provision of copies of evidence to them.

They also requested the IHC to direct the local court to grant them adequate time to prepare for their defence.

Zahir’s parents were taken into custody on July 25 following their son’s arrest for allegedly concealing material facts from the investigation team. Subsequently, they had approached a district and sessions court for bail.

The local court had on Aug 5 dismissed the post-arrest bail applications of Zahir Jaffer’s parents and observed that they had abetted the murder of Noor and attempted to conceal material evidence.

Later, they approached the Islamabad High Court for bail, which also rejected their plea and ordered authorities to keep them in detention until the completion of the trial.

Noor, 27, was found murdered at a residence in Islamabad’s upscale Sector F-7/4 on July 20.

A first information report (FIR) was registered later the same day against Zahir, who was arrested from the site of the murder, under Section 302 (premeditated murder) of the Pakistan Penal Code on the complaint of the victim’s father, Shaukat Ali Mukadam.

Zahir’s parents and household staff were also arrested on July 24 over allegations of “hiding evidence and being complicit in the crime”. They were made a part of the investigation based on Shaukat’s statement, according to a police spokesperson.

In his complaint, Shaukat had stated that he had gone to Rawalpindi on July 19 to buy a goat for Eidul Azha, while his wife had gone out to pick up clothes from her tailor. When he had returned home in the evening, the couple found their daughter Noor absent from their house in Islamabad.

They had found her cellphone number switched off and started a search for her. Sometime later, Noor had called her parents to inform them that she was travelling to Lahore with some friends and would return in a day or two, according to the FIR.

The complainant said he had later received a call from the suspect, whose family were the ex-diplomat’s acquaintances. The suspect had informed Shaukat that Noor was not with him, the FIR said.

At around 10pm on July 20, the victim’s father had received a call from Kohsar police station, informing him that Noor had been murdered.

Police had subsequently taken the complainant to Zahir’s house in Sector F-7/4 where he discovered that his “daughter has been brutally murdered with a sharp-edged weapon and beheaded”, according to the FIR.

Shaukat, who identified his daughter’s body, has sought the maximum punishment under the law against Zahir for allegedly murdering his daughter.

Police later said that Zahir had confessed to killing Noor while his DNA test and fingerprints also showed his involvement in the murder.