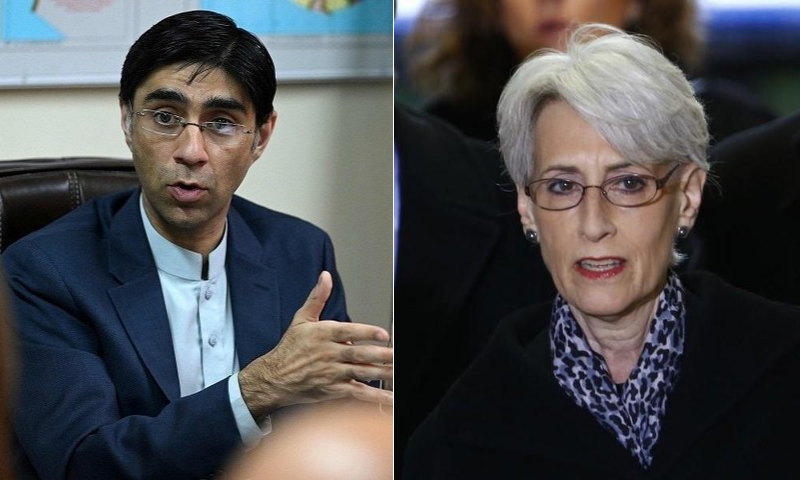 National Security Adviser (NSA) Moeed Yusuf, in a meeting with US Deputy Secretary of State Wendy Sherman on Friday, stressed that the international community “must maintain contact” with the interim Taliban government in Afghanistan.

According to a report by Radio Pakistan, during the meeting both sides expressed the desire to promote bilateral relations between the United States and Pakistan.

They also discussed economic cooperation as well as the security situation in the region, it added.

According to the report, the US delegation appreciated Pakistan’s efforts to evacuate foreigners from Afghanistan and the help it extended to Afghan refugees.

In his remarks, Yusuf said that blatant human rights violations in Indian-occupied Kashmir also posed a threat to regional peace.

Sherman and her seven-member team arrived in Islamabad on Thursday for a two-day visit to the country.

She had earlier visited India for a series of bilateral meetings, civil society events, and the India Ideas Summit.

Sherman is the senior-most official in the State Department after Secretary of State Antony Blinken.

She is the highest-ranking US visitor to Pakistan under President Joe Biden since the Taliban’s victory in Kabul.

“The visit is taking place at a very critical time, both in the context of Afghanistan and developments in the wider region,” said a senior diplomatic source when asked to explain why Islamabad sees this as an important visit.

The source pointed out that the Biden administration did “not seem to be reluctant to travel to both India and Pakistan in one go, which was the case in the past”.

“This is an important visit, and we look forward to engaging with Deputy Secretary Sherman,” Pakistan’s US Ambassador Asad Majeed Khan earlier told Dawn. “Together, we would explore ways to strengthen and expand our bilateral cooperation in areas of mutual interest and concern.”

According to sources, the Biden administration is focusing on four major points in its talks with Pakistan — recognition of the Taliban government in Kabul, international sanctions on Afghanistan, access to Afghanistan and counter-terrorism cooperation.

The sources say that the United States does not want Pakistan to recognise the Taliban regime before the rest of the international community. Instead, it wants Pakistan to continue its efforts for softening the Taliban position on controversial issues, such as inclusive governance, human rights, girls’ education and allowing women to work.

“We seek a strong partnership with Pakistan on counterterrorism and we expect sustained action against all militant and terrorist groups without distinction,” Sherman had told reporters last week ahead of the visit.

“Both of our countries have suffered terribly from the scourge of terrorism and we look forward to cooperative efforts to eliminate all regional and global terrorist threats,” she had said.