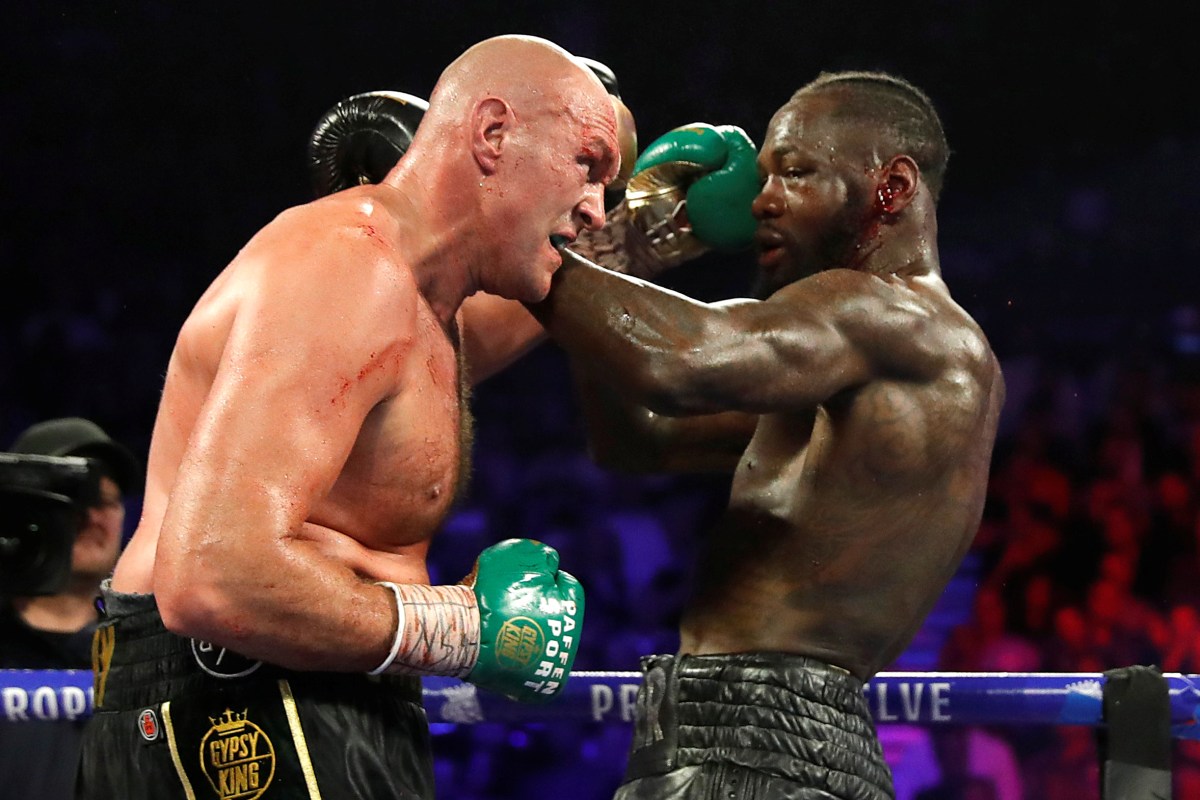 TYSON FURY is expected to start where he left off and batter Deontay Wilder to another humiliating defeat even if America’s Bronze Bomber enters the ring stark naked tomorrow.

Wilder was stopped in the seventh round after his trainer Mark Breland  threw in the towel –  a merciful gesture that got him the sack – when they last met 20 months ago as the American lost his WBC world heavyweight title but also his unbeaten record and his credibility.

His ludicrous excuse that his crushing defeat was because he tired himself out before climbing through the ropes under the 40lb weight of his bizarre Star Wars ring-walk costume belongs in the dog ate my homework category.

The simple truth is Fury exposed Wilder for what he was – an unskilled crude banger who was an easy target to hit.

Tyson was on fire and still fuming at being robbed of victory when their first clash was dubiously ruled as a draw 14 months before.

At last after two frustrating postponements they come face-to-face in what could turn out to be a thrilling and Titanic Trilogy in Las Vegas’s T-Mobile Arena.

If it’s as good as the two most famous heavyweight trilogies between Muhammad Ali and Joe Frazier and Evander Holyfield and Riddick Bowe,  fans who pay £24.95 to see it on TV near breakfast time on Sunday morning won’t be able to claim they didn’t get value for money.

It’s certainly going to be fascinating to see if the Gypsy King can just as emphatically demolish Wilder as he did before.

If he does, that could see the end of Deontay’s career.

But hanging in the air is the thought that perhaps Wilder under new trainer Malik Scott – his one time sparring partner – has managed to iron-out many of his boxing imperfections so he can gain sweet revenge.

Remarkably Fury and Anthony Joshua between them dominated the heavyweight division for six years.

That’s until Joshua’s abject failure against Oleksandr Usyk when he waived goodbye to the WBA, IBF and WBO belts which may have killed off the £200 million fight with Fury at Wembley Stadium forever.

Though it was a fortnight ago I still can’t get over Joshua’s tame capitulation – making the brilliant master craftsman Usyk look even better than he is.

AJ seemed to have completely lost his fighting spirit and like my local petrol pumps his tactical ideas were running on empty.

The way Joshua was laughing and joking and fist-pumping with his fans as he strode to his downfall made me think he was more suited to star at the London Palladium than Madison Square Garden.

Fury enjoys a bit of fun in the build-up to his fights but when it comes to working hours he’s all serious business.

He knows any complacency or a single slip in concentration and his crown could be packed in Wilder’s luggage on its way back to Alabama.

Deontay may not have learned much more in recent months in how to execute some of the fine points of the Noble Art but he still carries dynamite in his right fist.

Scott, who was stopped in six rounds by Derek Chisora, at Wembley eight years ago, said proudly: “One thing no one can ever change about Deontay is the God-given power.”

We have to presume that Wilder will be far more canny on this occasion and not allow Fury the freedom of his exposed chin.

After what happened in February last year Fury – an 4/11 favourite – will have the psychological edge and I won’t be surprised if he produces a repeat performance and finishes Wilder off even quicker.

Two weeks ago I pointed out Usyk as the challenger was an unusually short-priced  9/4, which could only mean there was a lot of smart money on his back. Wilder also happens to be quoted at 9/4.

Is that an omen?  If it is, there likely to be a very short British queue to buy tickets for the Usyk-Wilder unification showdown.