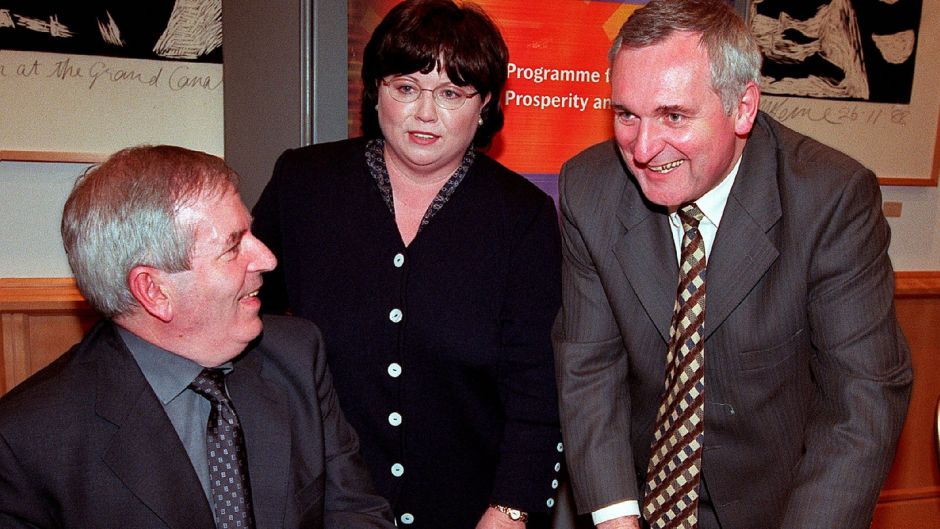 It was Paul Haran, then secretary general of the Department of Enterprise who came up with the figure of 12.5 per cent for corporate tax in Ireland in early 1997, a rate that would become the bedrock of Ireland’s industrial policy for nearly a quarter of a century.

Ruairí Quinn, the Labour minister for finance at the time, recalls there was huge pressure from Europe during that government’s term to change the rate. Ireland had introduced a manufacturing rate of 10 per cent in 1980 and had extended that low rate to the IFSC when it opened in 1987. But there was also a higher industrial rate.

“There were two different rates and we were coming under pressure from the European Union to synchronise it into a single rate,” recalls Quinn.

“I was reluctant initially because we were getting good returns from both.

“Just as is happening now, it was inevitable that the European Union would not allow us to have two rates for essentially the same sector of activity.”

Mary Harney, the Progressive Democrats leader, was minister for enterprise in that government. “It was Paul Haran who came up with it. At the time there was a lot of talk about 15 per cent and 17.5 per cent. He thought 12.5 was half way between 10 and 15 and would work well.

“Charlie McCreevy [then minister for finance] and I went over to negotiate it in Brussels that September. Michel Barnier was one of the two commissioners with whom we negotiated.

“I can remember us arguing that Ireland was not stopping anybody else having a low tax rate. Fiscal policy in the main was a subsidiary matter; it was a stronger element of it in those days.”

So it was introduced. All of those politicians who supported the flat rate say its importance to the Irish economy could not be overstated, yet it was not the only selling point.

Says Quinn: “There was the regulation system, the access to law, physical and political stability and a cultural attitude favourable to doing business. The rate was a reflection of that. It was not a unique stand-alone operation on its own.”

Harney says it was the foundation of Irish industrial policy for 20 years, not just for multinationals but for Irish companies too.

“It was a door-opener for the IDA, the 12.5 per cent, but tax on its own won’t save you. Just because we are the only English-speaking State in the EU is not enough either.

“There were other factors: education; talent, infrastructure, education; the ability to take in talent [from abroad].”

She said the State could also give certainty to potential investors that no matter what government was in office, the rate would remain.

Billy Kelleher, the Fianna Fáil MEP, was a minister of state for trade and commerce and regularly met companies looking at locating in Ireland.

“The legal certainty of 12.5 per cent and the political certainty, they were both very important. We offered a stable environment, an English-speaking country, energy security, as well as protection of copyright and intellectual property.

“When you look at the number of large multinationals located in Ireland, the Googles, the Apples, the Microsofts, Facebook, the Dells, also the pharmaceutical companies, and a broad range of medical device companies, the 12.5 per cent was an important consideration for all of them.

“All political parties including left-of-centre parties could see the tangible results of the policy as it made its mark.”

Indeed, in the past decade all the larger political parties, including Sinn Féin and the Greens, adopted the 12.5 per cent rate as part of their official policies.

Is it appropriate to change it now, and is the rate as important to Ireland any more?

The consensus among the three political figures is that the change is unavoidable but at the same time will not work to Ireland’s detriment, as long as the suggested replacement figure of 15 per cent across OECD countries is not altered upwards.

“It will still leave Ireland with a well-educated workforce and the other factors will work in our favour,” says Quinn.

“I hold the view that it will not be disadvantageous. I think [Minister for Finance] Paschal Donohoe is correct in holding out for clarity in relation to certainty as to what 15 per cent actually means and there is not a possibility of it becoming more,” he says.

Kelleher says that the 15 per cent must hold for all and that hidden tax exemptions or breaks, used by some European countires in the past to lower the effective rate, must be eliminated to ensure a level playing field.

Harney is of the view the Government has done well at keeping it at 15 per cent and getting the phrase “at least 15 per cent” removed. “I don’t think it will have as negative an impact as people think, especially if there is certainty around the 15 per cent,” she says.

“Overall, whilst I recognise the significance of the 12.5 per cent I support what has happened given the global context, the fact that all other countries were signing up to the OECD figure. We could not have been the Lone Ranger holding onto 12.5 per cent. I think it’s quite a good deal.”