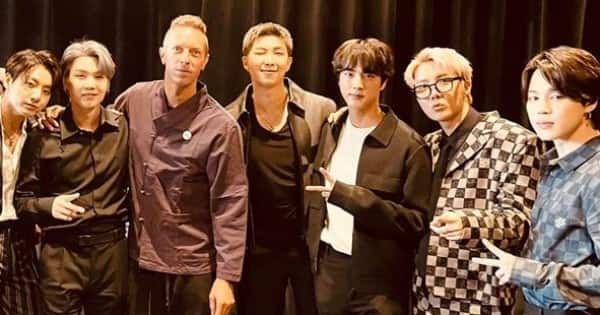 Earlier, a few of the BTS members had surfaced online where they were seen playing the guessing game amongst themselves. They went head to head to find out which is Jungkook’s favorite song. J-Hope was the first to guess and he said Euphoria and So What. However, it was a wrong guess. Jimin said On while V felt it was one of Jungkook’s singles. But they just didn’t realise that Jungkook hasn’t said anything. Then finally, Jungkook decided that On was the correct answer. Jungkook revealed that they haven’t performed the song front of ARMYs yet and it would be nice if they perform now as the ARMY would love it. Jungkook also did a few steps on the song. Also Read – BTS: Jin, Suga, J-Hope, RM, Jimin, V and Jungkook’s individual net worth will blow your mind away!

Recently, we all saw the biggest collaboration between BTS and Coldplay. It was definitely one of the most memorable moments between Coldplay lead singer Chris Martin and the BTS members RM, Jin, Jimin, Jungkook, J-Hope, V and Suga. Chris flew all the way to South Korea to record the song in person to add more sincerity to the song. And it was this time when the two iconic music groups met each other for the first time. You wouldn’t believe but Chris was actually a little nervous while recording their single My Universe in their maiden collaboration. Also Read – BTS’ RM gives an interesting reply to ARMY about riding a bicycle gifted to him by Jin

In the Coldplay X BTS Inside ‘My Universe’ Documentary, Chris shared how it was so special for him to meet the Bangton Boys amid the COVID-19 safety concerns. He admitted that he was nervous to meet the K-Pop band members since he had not met them ever before. “We’ve been very lucky with people allowing us to come in just to record, and it was quite a stressful journey. And I was a little nervous here. I’ve never met BTS before,” Chris Martin said in the documentary. Also Read – BTS’ ‘Love Myself’ campaign with UN raises humongous amount to end violence and abuse against children; ARMY plays a huge role