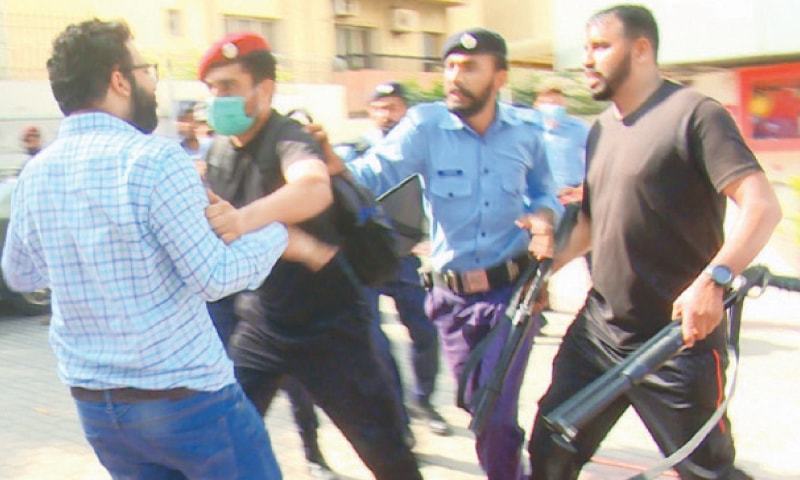 ISLAMABAD: While students appearing in Medical and Dental Colleges Admission Test (MDCAT) have been staging a sit-in at D-Chowk of the federal capital for the last 13 days, a few hundred young doctors also reached Islamabad and while protesting against National Licensing Exami­nation (NLE) forcibly ente­red the premises of the Pakistan Medical Commis­sion (PMC) on Tuesday.

The protesters also had a clash with police during which several protesters and police officials, including a superintendent of police (SP), were injured. Later a number of students were arrested by police.

The graduates working at government hospitals announced that they would close out-patient departments (OPDs) of their hospitals across the country.

The district administration tried to arrange negotiations between the doctors and Special Assistant to the Prime Minister (SAPM) on Health Dr Faisal Sultan, but the latter remained unavailable till late evening.

On the other hand, the PMC announced dates for the next NLE and National Examination Board (NEB) tests, giving an impression that it was not impressed with the show of the protesters.

According to PMC Act, every graduate after completion of studies has to pass NLE before starting practice. However medical graduates have been protesting against the NLE saying as they appear in a number of exams to earn MBBS degree, why they should again have to clear an exam after completion of house job.

The graduates started reaching outside the PMC offices after 9am and then they blocked the road.

They were also demanding removal of PMC President Dr Arshad Taqi and Vice President Ali Raza. They announced they would lock the PMC offices if their demands were not accepted.

A large number of policemen, along with a water cannon, were deployed there.

Since morning the doctors were demanding negotiations with the members of the parliamentary committee on health or an assurance from Dr Sultan that NLE would be abolished. However, no one reached there or called them for negotiations.

At around 2pm, the graduates exchanged hated arguments with police and after a clash with them, they forcibly entered the premises of the PMC. However, their leaders stopped them from entering the main building.

Police launched a crackdown against the graduates, subjecting them to baton charge and tear gas shelling, and arrested a number of them.

Later Chairman of the Young Doctors Association Dr Haider Abbasi held a press conference in which he alleged that a number of doctors were injured.

Deputy Commissioner (DC) of Islamabad Hamza Shafqat intervened and offered that the arrested graduates could be released if the doctors called off their protest.

However, the protesters insisted their fellows should be released first and then they would take part in negotiations. The DC told them that the SAPM was busy in a cabinet meeting.

SP, Sadar, Mr Nosherwan said the protesters threw bricks at him due to which he was injured.

“We are also against NLE. … Moreover, we demand only doctors should be members of the PMC. A doctor cannot become a judge then why a lawyer has been appointed as vice president of the Commission,” he said.

At 8:30pm, the graduates announced they were going to end their sit-in and they would close OPDs at government hospitals across the country from Wednesday (today).

They said they had reached Islamabad to hold a peaceful protest but faced baton charge and tear gas shelling. They alleged that about 100 graduates had been arrested. They said no one had bothered to contact them for negotiations.

On the other hand, the PMC announced on social media that NLE exam step II would be held on Oct 29, NEB on Nov 28 and NLE step I on Dec 1.

National Command and Operation Center data shared on Tuesday showed that 1,308 new Covid-19 cases and 54 deaths caused by the disease were reported in a single day. The national positivity rate remained at 2.67 per cent.

Meanwhile, Easypaisa has become the first digital payment platform to introduce vaccination certificate payment, thus enabling millions of Pakistanis who lack access to other modes of payments such as credit or debit cards. People can now pay for their vaccination certificates instantly without any extra hassle or charges.

Covid-19 vaccination certificates can be downloaded from the website of the National Immunisation Management System (NIMS). After filling in details on the NIMS website, customers can now opt for paying through the Easypaisa wallet or by visiting any one of the 170,000 registered Easypaisa agents across the country.