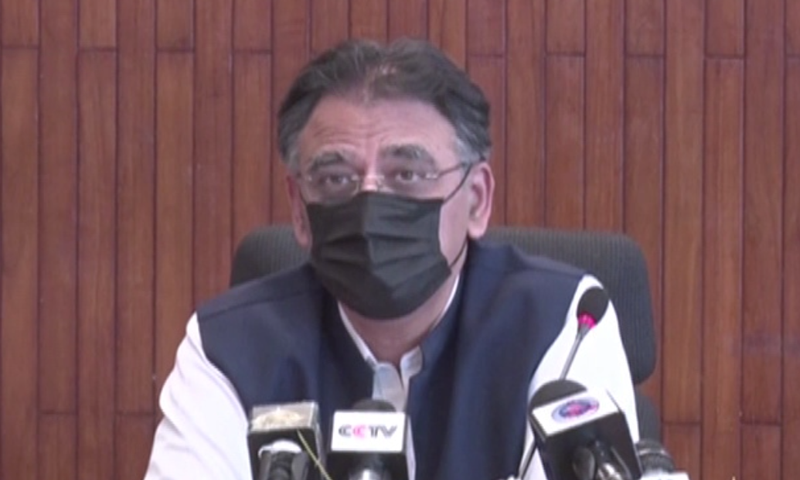 Planning and Development Minister Asad Umar on Wednesday said Pakistan did not have a “China debt” problem pertaining to loan financing from the China-Pakistan Economic Corridor (CPEC) project.

Addressing a press conference in Islamabad, the planning minister acknowledged that Pakistan had a debt servicing and debt sustainability challenge but stressed that “we do not have a China debt problem.”

Umar was responding to a recent report by a US-based international development research lab, AidData, that was critical of CPEC.

He recalled that the report had raised four main issues about CPEC: lack of transparency, imposition of secret loans on Pakistan, loans being expensive and Pakistan’s debt rising to a dangerous level because of CPEC.

Dismissing the concerns, Umar said information on CPEC projects had been shared a number of times and that the Senate and the National Assembly committees had even had their queries answered. “Parliamentary oversight is present over it,” he said.

Umar said that data on energy and power projects was available with the National Electric Power Regulatory Authority and that the government had provided information about CPEC to the International Monetary Fund at the start of its programme.

Regarding the purported issuance of secret loans, the planning minister said: “We tried to think about it but [only one thing] comes to our mind that maybe they are calling sovereign guarantees for any loan or project as secret or hidden debt.”

He explained that sovereign guarantees were provided to all independent power producers — whether domestic or foreign — and “nothing new was created in this [and] neither is it a secret”.

He said there were various other projects where the government utilised measures such as sovereign guarantees or standby credit to support the private sector in making investments instead of putting up its own cash.

Umar claimed that CPEC loans for private power projects were comparatively cheaper than loans from other international agencies such as the World Bank or the Asian Development Bank.

Regarding the loans for infrastructure projects, he said a majority of them were taken at a concessional rate of two per cent interest. Umar added that China had provided various grants as well for different CPEC projects and if they were included then “the average rate of the government-to-government loan is less than 2pc”.

The planning minister said the information was shared “before as well” and that it was being repeated due to the report being highlighted in the media.

On the concern regarding Pakistan’s debt reaching a “dangerous level”, he said Chinese debt comprised only 10pc of the country’s general debt (domestic and foreign) and 26pc of its external debt.

“So the 74pc of the [loan] money we took from the rest of the world — mostly from the West and multilateral agencies — [somehow] doesn’t endanger Pakistan but it faces a threat from this 26pc? This is a completely wrong argument,” he argued.

He said Pakistan’s debt sustainability challenges were not due to Chinese loans but the country’s own internal issues.

Umar also denied that a preferential treatment was being given to Chinese investors, saying that the same conditions were devised and offered to the world for setting up power projects.

“Only Chinese investors came to set up [power plants] under those conditions […] so this policy was not made just for the Chinese but for the whole world,” he said.