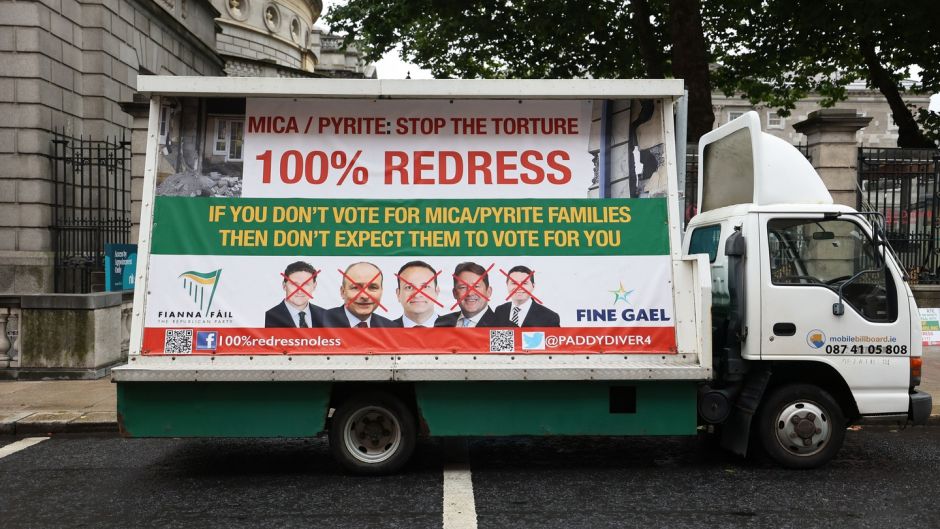 Full redress for families whose homes have been destroyed or significantly damaged by mica is still under consideration, the Dáil has heard.

Minister for Housing Darragh O’Brien said that “nothing, including the caps or the 100 per cent is off the table”, adding that the changes would require legislation.

He will bring proposals offering a number of options to Cabinet in the coming weeks and would not delay on the issue.

He also said he will pursue those responsible for the problems caused by mica in blocks used in construction and which over time results in crumbling of the bricks. And he is considering a levy on the construction industry.

Mr O’Brien was taking his first leaders’ questions for the Taoiseach who is in Slovenia and replying to Sinn Féin Donegal TD Pádraig Mac Lochlainn and Independent Limerick TD Richard O’Donoghue.

Mr O’Donoghue called on the Minster to give the thousands of home owners affected 100 per cent redress but “give a guarantee that you will go after the banks and insurance companies” who gave the mortgages and insured those householders.

He called on the Minister to pursue the quarry block suppliers who were liable.

The Minister, who said he “inherited” the existing scheme, pledged to engage with stakeholders and insisted he would pursue those who are responsible.

He said they Government had a moral responsibility but others had to make a contribution. A senior engineer had been engaged to assist in the identification of wrongdoers who can be pursued.

Mr O’Brien said lessons had to learned, adding that he had set up a working group on defective housing issues.

He said provision had been made for a levy on the sector in 2012 but was not acted on and he is considering this.

Mr Mac Lochlainn said homes are crumbling around families in what he described as “an earthquake happening in slow motion” and a “national disaster”.

Families who previously demonstrated outside the Dáil in June will protest again outside Leinster House on Friday, to seek 100 per cent redress.

He said that in June the Dáil unanimously passed a motion calling on the Government to provide 100 per cent redress but four months later they were still waiting.

It had taken a heavy toll on families through financial ruin, emotional breakdowns and “a real sense of abandonment by the State”.

Mr O’Brien insisted that he was taking the mater very seriously and was heavily involved in the issue. He would bring proposals to Government in the coming weeks and would not delay on the matter.

He added that the proposals would be “underpinned by three core principles that the enhancements and changes we made are timely, that are reasonable, and that they’re consistent”.