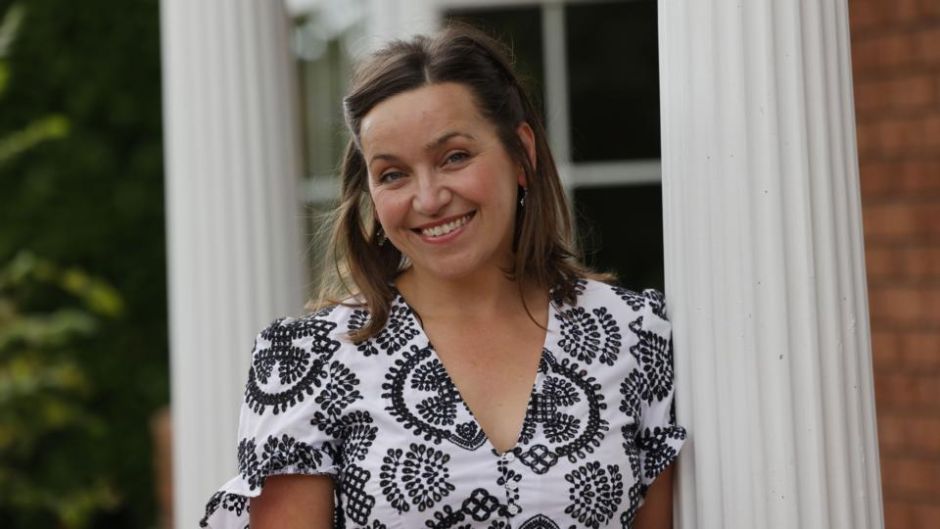 Three days after moving to Co Louth from Aberdeenshire, in Scotland, to join her husband, with their two children, and two dogs, Charlene Mathieson and her family went to the Termonfeckin St Stephen’s Day fun run at the local GAA club.

They had landed on December 23rd, 2019, and chose to stay in Ireland that Christmas to make the move and their new home feel “more real”, she says. The fun run was their first opportunity to begin the process of integrating into the community, which Mathieson says she was keen to do.

Within a few months her two children nine-year-old Isla and six-year-old Sandy, were taking part in the club’s camogie, hurling and football training, and Mathieson has since joined the Mothers and Others weekly Gaelic training group.

“I had never played a team sport in my life, but I’m really enjoying it. There’s about 50 mums there. We’re just there for the craic. I do it for the social aspect. It’s been a lifeline, the GAA.”

“What impressed me the most was how much commitment is given by so many people in the community. It’s all voluntary, and the facilities are outstanding. To see the children all proud to wear [local colours], that’s something we wanted our kids to be involved in.”

Mathieson, who is originally from Hartlepool, in northeast England, had never encountered the GAA before her husband’s new job brought them to Ireland. He moved over in the summer of 2019, and in the months before she joined him with their children, in December, Mathieson researched activities for them through social-media pages of local clubs and volunteer groups.

“Neither of us had ever been to Ireland, we didn’t know anyone here, we just took a leap of faith in coming over. I knew it would be a welcoming country, and people have been very welcoming.

“Communities are really family-orientated. People tend to gravitate towards their families. I didn’t realise how strong those bonds were.”

Covid-19 arrived just nine weeks after Mathieson and her family had moved over, meaning meeting new people and integrating became much harder. The family tried to use this isolation in their new home to their advantage in other ways.

I wanted to be able to walk into a supermarket and say hello to somebody, to bump into somebody and know who they are. So when that started happening, that felt like we were finally known

“We tried to think of it as a new adventure – nothing’s boring, nothing’s mundane, we still get to explore because it’s all new. If we kept flying over for a weekend to see friends in Scotland or family in England, I think the children may have struggled with settling in. So it worked in our favour.”

Mathieson took up a role at Louth Volunteer Centre as an advocacy administrator, researching events and other groups in the local area, which helped her to meet new people, and she enrolled in a course for people looking to work with charities.

She also joined the Migrant Volunteer Network. She says she has found Ireland to be more diverse and multicultural than she expected.

Mathieson says most of the volunteer and community groups were able to continue their work during lockdowns, through video calls and online research.

“I wanted to be able to walk into a supermarket and say hello to somebody. Something as simple as that – go out, into the town and bump into somebody and know who they are. So when that started happening, that felt like we were finally known.

“Me becoming involved in the GAA really helped. If I go to the shop now, I’m able to say hello to people. There’s that connection. The clubs were the biggest thing for us, and putting yourself out there, into the community.”

Mathieson, who is a secondary-school French teacher, took a year out initially to help their children settle into their new home. This, however, turned into two years out, after Covid arrived. She has just started back at a local school on maternity cover, and is adjusting to the new curriculum and style of learning in Ireland.

The Scottish exam system is similar to the Junior and Leaving Certificates, but Mathieson believes the Irish system allows students more opportunity to reflect on why they’re learning a language. She also feels that children have a different experience of childhood in Ireland.

“Children are still children here. There’s still a level of naivety for them. They don’t have a care in the world.We noticed a difference with school. In the UK it’s very results-driven, even from an early age at primary school. In Scotland it was about pushing [the children] – what can we do to improve, take it to the next level. Whereas here we take our time. It allows them space to breath.”

“Everything is geared around the children – the GAA, the clubs, seeing families on the beach. It just seems that their priority is their family, their children.”

“People don’t let their responsibilities drop because they’re too busy – they make sure it’s still a priority, that the children still get the experiences of being in childhood, and having sport and fun and friendships.”

Mathieson also notes, as part of the strong sense of community she’s encountered in Ireland, the sense of social responsibility. She mentions a number of social-media pages locally which do whip-rounds for those in need, in one instance sourcing a new washing machine from a local shop for an older woman whose own was beyond repair.

“That’s really bowled me over – the level of social responsibility which people feel, to look after each other. Ireland is an industrious nation. People work bloody hard. When you hear what people are doing  – they’ve got a job, they volunteer, maybe they’re going to cut their trees down, or build something for their mother – very industrious.”

After almost two years in Co Louth, having previously moved to Scotland from northern England, Mathieson doubts they will move on again any time soon. The process of integration is ongoing, but she believes the children have settled well.

“My daughter’s accent is changing; she sounds very Irish. My son met Davy Fitzgerald the hurler and got a picture with him, and said he wants to be a hurler. He also wants to start Irish dancing, I think he regards himself as the next Michael Flatley.”

“The children are thriving here. They’re still allowed to be children: they aren’t growing up too fast. I love the community of the GAA. I’d love them to both continue that through school. It’s such a good thing to have. So many valuable things can be learned through it. We’ll be here for the long run.”

We would like to hear from people who have moved to Ireland in the past 10 years. To get involved, email newtotheparish@irishtimes.com.