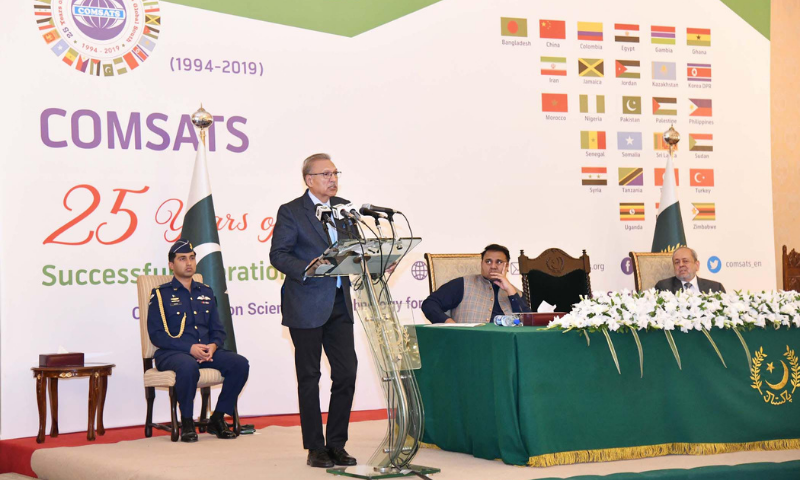 President Dr Arif Alvi stressed on Wednesday the need to focus on Science, Technology, Engineering and Mathematics (STEM) subjects in the education sector, saying it was important for the country and people to progress.

Addressing a ceremony held to launch the STEM programme for higher secondary school students, he compared Pakistan with its neighbouring countries in this regard.

“China produces around 4.7 million graduates in STEM subjects every, while India produces around 2.6 million and Iran 350,000. And where do we stand?” the president said, adding that he believed that the number of STEM graduates was lower in Pakistan.

He called for increased focus on STEM in the education sector, saying that it was crucial for the nation to compete with the rest of the world so that it did not lag behind and progress.

According to a report by Radio Pakistan, the programme, which will train students in STEM subjects, will be launched by the Ministry of Science and Technology in 50 government-run higher secondary schools across the country.

Students of grades 9 to 12 will be enrolled in the pilot programme and selected “based on their ability and talent”, it added.

In a video message ahead of the programme’s launch, Minister for Science and Technology Shibli Faraz said STEM subjects had acquired a “special importance” in the world.

Sharing details about the programme, Faraz said the programme was planned in 2020 and he and his team had worked on it day and night to give it “practical shape”.

Initially, the programme would be introduced in 50 schools, he said, adding that special laboratories would be built and teachers would be given specific training.

“These schools will also be associated with universities. The schools have been selected purely on merit, not political reasons. The principals will be our guests [in today’s event].”

A new era of progress will start because of these STEM schools in which we have given a new direction to the education system to make our students competitive globally, he further said.

The programme would have three aspects — labs, teacher training and STEM modules, he shared.

Meanwhile, Information Minister Fawad Chaudhry, who previously held the portfolio of science and technology, termed the programme a “game changer”.

He said he had designed the programme because the country will “not change” until government schools are modernised.

“I am very happy that this plan is turning into a reality despite delays,” he said in a tweet.

The minister expressed hope that more schools would adopt the STEM model following its implementation in 450 schools initially. Universities have been instructed to “adopt” schools and improve the level of science education, he shared.

The Prime Minister’s Office (PMO) had said at the time that special laboratories for science and technology, engineering and mathematics would be established in 40 schools in the first phase.

Around 100,000 children in 400 schools will have access to education and training in modern sciences through the project.