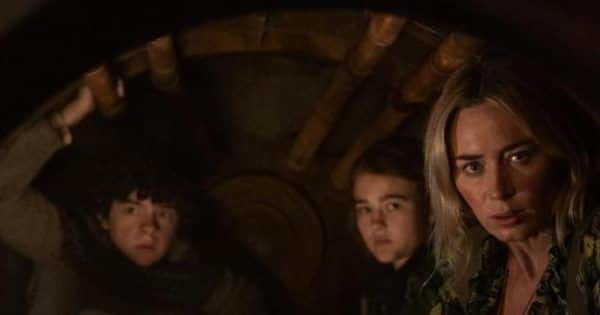 When A Quiet Place released in 2018, nobody had expected it to be the kind of raging commercial and critical success it had turned out. And though I wouldn’t consider it one of the best creature features I’ve seen (too derivative of Tremors in plot elements if not tone and treatment), following up such a runaway smash is always a tough act. That’s where writer-Director John Krasinski deserves all the praise he can get. A Quiet Place Part II not only loved up to the emotional undercurrent and edge-of-the-seat creature action of its predecessor, but the Emily Blunt, Millicent Simmonds, Noah Jupe and Cillian Murphy starrer actually managed to just about edge past the first part – a rarity for a sequel. Also Read – John Krasinski reveals he is working on a sequel to A Quiet Place

After losing husband Lee Abbott (John Krasinski) toward the end of the first movie, but discovering the Achilles Heel of the blind creatures with an acute sense of sound, Evelyn Abbott (Emily Blunt) and her kids, Regan (Millicent Simmonds) and Marcus (Noah Jupe) search for a new shelter, when they meet Lee’s old friend, Emmett (Cillian Murphy), who later informs them of the possibility of safe haven on an island secluded from the creatures, but a journey fraught with perils from both man and beast to reach said island.

Watch A Quiet Place 2 trailer below:

A Quiet Place Part II amps up the creature action from the first part and like its predecessor (which I consider a somber take on Tremors, but enjoyed quite a bit nevertheless), gives ample scope for its characters, even the new ones, to develop in the midst of their quest for survival. Millicent Simmonds and Noah Jupe are given more meat this time, and are par for the course, while Emily Blunt and Cillian Murphy are on the money as always. The climax also lead the franchise to an interesting new horizon (literally and metaphorically) and the film ended with me looking forward to the next. A special mention for Michael P. Shawver’s tight editing (better than the first time) and Polly Morgan’s atmospheric camerawork, perfectly caoturing the dystopian setting. Marco Beltrami’s backgound score is once again a lesson in how silence for the most part can speak volumes, when interspersed with sounds at just the right moments.

The new settlement that occupies a major chunk of the climax, could’ve been expanded upon as the backstory of the place leaves a lot of questions. Also, Djimon Hounsou has precious little to do, and you wonder why he keeps taking on such roles. Furthermore, some of the dialogues, especially between Evelyn and Emmett, could’ve been written with a bit more meat.

All in all, a good creature feature, which, maybe, will end up going down as better than the first A Quiet Place, but, probably, just falls short of some of the best creature horror movies out there. Felt the new settlement that occupies a major chunk of the climax could’ve been expanded upon before that kickass denouement took off. I’m going with 3.5 out of 5 stars.