The wicket of Virat Kohli and muting AB de Villiers’s bat; not a bad night out for Bhuvneshwar Kumar. He targeted Virat Kohli’s old lbw problem with a perfect nipbacker early in the chase. He then returned for the final over for his tryst with de Villiers. 12 runs were needed from four balls, and de Villiers blasted the full delivery straight to sweeper cover and didn’t take the single. The next ball was thrown back from the long-off stands. Now 6 from 2, and another dot ball as de Villiers chose to retain strike. The final one was a slower one outside off and de Villiers could only hit it to sweeper cover for a single. A gracious Villiers fist-pumped with Bhuvneshwar and Virat Kohli too congratulated him and enquired about the hurt right finger (possibly suffered when he tried to take a hard stinging return catch earlier) which Bhuvneshwar was hiding behind his back to avoid any injury. Little bit of finger pain is nothing in comparison to the match-winning feeling.

A flurry of emotions in both the camps as @SunRisers clinch a thriller against #RCB.

When he saw that his powerful drive somehow lodged itself in bowler Dan Christian’s hands after ricocheting off his body, Jason Roy was pretty cheesed off. He tossed his bat in disgust but very soon realised he had to do the hard job of bending and picking it up himself. Which he did after a while.
It’s not the first time his bat has cut a furious arc from his hand. His emotional quotient has always had the coaches working over time. Even at school. “We would have someone follow him into the dressing room when he got out and looked angry; to calm him down. A few plant pots have been kicked away and other non-living things have borne the brunt. Bats have been thrown,” the cricket coach at Reigate Priory school, Jim Harmer, once told this newspaper. No living or non-living thing was hurt when he lost his wicket on Wednesday night. At least on the field. 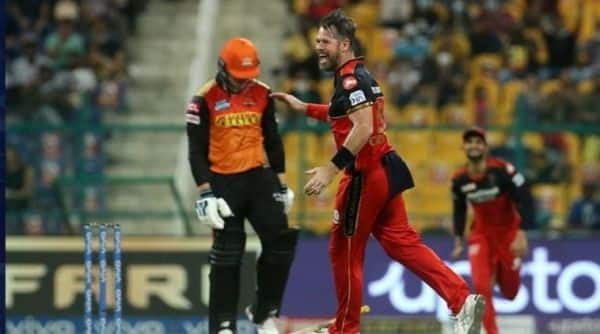 Harshal Patel thought he could do a Jonty Rhodes or Dhoni when he started to run with the ball to the stump as opposed to throwing. Rhodes flew into the stumps of course during the Inzamam run out and Dhoni ran to break it during a famous T20 world cup against Bangladesh. When Patel stopped the ball on his follow-through in the last over of Sunrisers Hyderabad’s innings, he turned and dashed to the stumps. But the man he was trying to beat was the tall Jason Holder who took a couple of lengthy strides and stretched his long limb to get the bat just in time. Nothing to fret though as Patel took his wicket off the final ball. The purple cap holder won’t mind one more wicket than a run-out dismissal.

Sometimes, you get what you give. Dan Christian would grimly admit.
With the ball, he tricked and teased the Sunrisers Hyderabad batsmen with an assortment of cleverly disguised slower ball—the off-cutter, leg-cutter, back-of-the-hand slower ball, the one propelled with the knuckles, the packed tool-set that has made him a BBL legend. The leg-cutter devoured Jason Roy while the knuckle ball foxed Priyam Garg, and he ended his night with impressive figures of 3-0-14-2. Of those 18 balls, 14 were slower balls. But in his four-ball stay, where he looked as confused as the batsmen he had tormented, he could not make head or tail of what the bowler was dishing out. The first ball was bunted to cover, he was looking to hit straighter, the second ball nicked his outside edge, the third trickled to cover, he was looking to tap it behind backward point, and in the fourth, even slower by Siddarth Kaul, he tried to flick prematurely and ended up gifting a simple catch to mid-off from a leading edge. It’s the manner in which he has bagged nearly half of his 262 T20 wickets. He got what he had given.

Eye of the tiger

The most difficult ball to bowl on a dead track is the bouncer—the worldly-wise bowlers would practically refrain from such exhaustive expending of back-breaking energy. Tell that to Umran Malik, he would call you old, and would do exactly that. Malik, exhaling fire and pace, hammered one onto the middle of the pitch, but rather than dying, the ball exploded towards the helmet of Glenn Maxwell. The Australian was already in half-swivel to pull the ball, but could barely manage to protect his head from a lifter. He had time neither to duck/sway/weave from the line of the ball nor complete the stroke. In the end, a top-edge reprieved him of a blow of more severe consequence. But where did the skiddy bounce originate? Certainly not from the anaesthetised pitch, but from the ambition of a driven tearaway, eager to make a mark.