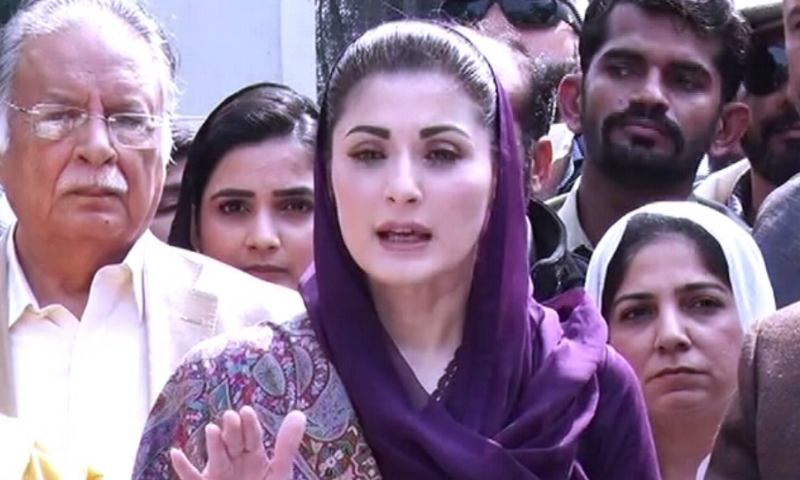 Accountability Court judge Mohammad Bashir had on July 6, 2018 — 19 days before the general elections — convicted former prime minister Nawaz Sharif, his daughter Maryam Nawaz and her husband retired Captain Mohammad Safdar in the Avenfield Apartment reference and handed them jail terms of 10, seven and one years, respectively, for owning assets beyond known sources of income.

They had filed appeals in the IHC against the conviction. The court had on Sep 18 the same year suspended their sentences and released them on bail.

NAB is now seeking expeditious disposal of the appeals in 30 days.

In her petition, a copy of which is available with Dawn.com, which she filed through Advocate Irfan Qadir, Maryam said the entire proceedings that resulted in her conviction were a “classic example of outright violations of law and political engineering hitherto unheard of in the history of Pakistan”.

She also attached a reference to the speech made by former IHC judge Shaukat Aziz Siddiqui at the District Bar Association, Rawalpindi on July 21, 2018, wherein he had claimed that the country’s top intelligence agency was involved in manipulating judicial proceedings.

“The ISI officials had approached the chief justice asking him to make sure Nawaz and his daughter should not be bailed before the elections,” reads the petition, quoting an excerpt from ex-judge Siddiqui’s speech.

In a tweet later, Maryam said the media “for reasons known to everyone” had not highlighted the core subject of her petition submitted to the IHC. “The summary of which is that the case/verdict against me was pre-planned, orchestrated and influenced by Gen Faiz Hameed, the then DG [counter-intelligence],” she wrote, referring to the current Inter-Services Intelligence (ISI) chief.

She said the same had been “revealed” by Justice Siddiqui, “who has exposed the manner in which law, principles of justice & fair-play were not only violated but made a mockery of, making this case a classic example of how political victimisation in Pakistan is carried out at the cost of judiciary, constitution & law”.

The manner in which the case unfolded “also makes evident how individuals [such] as Gen Faiz Hameed not only violate the sanctity of their oath but also in doing that bring a bad name to the revered institution of The Armed Forces that resultantly has to bear the brunt of personal ambitions”, the PML-N leader alleged.

Earlier in June this year, Siddiqui’s lawyer had read out his statement in the Supreme Court during the hearing of his appeal against the opinion of the Supreme Judicial Council (SJC) as well as the Oct 11, 2018, notification under which he was removed as a judge of the high court for a speech he made on July 21 that year.

His counsel had said that during his visit on July 19, 2018, incumbent ISI Director-General, who was then DG counter-intelligence, Lt Gen Faiz Hameed, told Siddiqui that after his June 2018 verdict, he was summoned by the army chief who showed great annoyance and displeasure.

In June 2018, Justice Siddiqui of the IHC had directed the ISI to remove encroachments from a portion of Khayaban-i-Suharwardi in front of the headquarters of the spy agency in Islamabad.

In his statement to the SC during the hearing of the case on June 9, 2021, Siddiqui had claimed that when he asked how they managed the constitution of a bench to hear the appeal against the conviction of former prime minister Nawaz Sharif, Gen Hameed told him that the then IHC chief justice, Anwar Khan Kasi, was approached in Quetta through a common friend, where he was asked to constitute a division bench which was not headed by Justice Siddiqui. Justice Kasi, according to Siddiqui, told Gen Hameed he “will constitute a bench about which we are comfortable”.

Gen Hameed had further said that they wanted an assurance that the bail plea of accused Nawaz Sharif was not taken up before the 2018 general election, Siddiqui’s counsel said, adding that they wanted that later, the matter be brought before a bench headed by Justice Siddiqui to attach some credence.

“To this, I categorically replied that if from the material, I feel convinced for enhancement of the sentence, I will not hesitate to issue notice for enhancement to the conviction, but if the judgement would not be sustainable in the eyes of law, I will not spoil my hereafter to protect worldly affairs of any,” his lawyer had quoted Siddiqui as saying.

Urging the court to consider the aforesaid events, Maryam also referred to Accountability Judge Arshad Malik whose video had also gone viral in which he claimed that he had been “pressured and blackmailed” to convict Nawaz Sharif.

In December 2018, Malik had convicted ex-premier Nawaz Sharif in the Al Azizia reference, sentencing him to seven years in jail. However, he had acquitted Sharif in the Flagship reference.

Concluding her petition, the PML-N vice president urged the IHC to declare the accountability court’s verdict void and order her acquittal from all charges in the case.