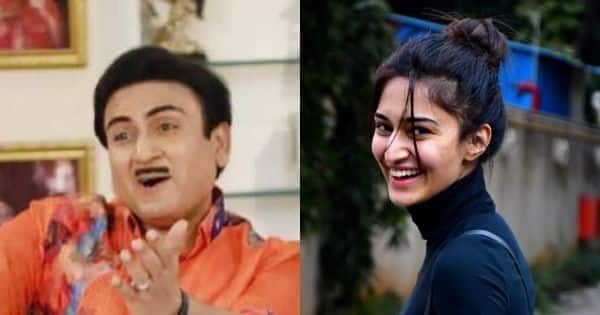 The day has ended and it is time to look at all the important stories from the television industry. From Taarak Mehta Ka Ooltah Chashmah’s Jethalal grooving to BTS’ song Butter to rumours of Erica Fernandes quitting Kuch Rang Pyaar Ke Aise Bhi 3, here are the trending TV news of the day. Also Read – BTS X Coldplay: Did you know Chris Martin was nervous about meeting the Bangton Boys for My Universe? Deets inside

There is no doubt that BTS Indian ARMY is a pro when it comes to making edits. There are edits that can make us laugh all day long. We chanced upon this one which is a merge of Taarak Mehta Ka Ooltah Chashmah and BTS’ Butter. We can see our very own Jethalal actor Dilip Joshi grooving on the peppy track of the year. BTS which has members like RM, SUGA, Jimin, Jin, Jungkook, J-Hope and Kim Taehyung is adored in India. Bangtan boys have said they did like to come to India as and when the situation gets better. We hope we get to see them real soon. Also Read – K-pop Star Studded 2021 MOKKOJI KOREA to Hold Special India Week

Kuch Rang Pyaar Ke Aise Bhi 3 is hardly a success compared to the first or second season. Now, rumours are coming that Erica Fernandes is planning to quit the show. The show was about Dev (Shaheer Sheikh) and Sonakshi (Erica Fernandes) finding out that Suhana is not their biological child. They bring Ayush home, who is their first son. This impacts the relationship of the couple as they struggle between managing work, home and conflicted emotions. The new track on the show is the arrival of a new member that has further complicated the situation. We have seen the entry of Sana Amin Sheikh on the show. The radio host and actress is playing the role of Suhana’s aunt. Ever since her entry, there has been a lot of focus on Sanjana. This has kind of altered the storyline. A source has told SpotboyE that Erica Fernandes is upset with her character development and overall trajectory of the show. Well, the writing seems to be inconsistent this season. This has been noticed even by viewers of the show. On the show, Erica plays the role of Dr Sonakshi Bose who is an opinionated woman managing both a home and a job in a traditional family. Erica Fernandes has not responded to rumours of quitting the show. There was some talk that Bigg Boss makers have approached top actresses to be in a wild card in the middle of the season. We do not know if she is considering that proposal given that some rumours did the rounds. Also Read – Do you know? BTS members don’t like big hotels rooms and the reason will make ARMY so proud

While Arjun Bijlani won the 11th season of Khatron Ke Khiladi hosted by the blockbuster Rohit Shetty, Divyanka Tripathi Dahiya, who emerged as the first runner-up, was a winner for the viewers. In fact, we saw fans slamming the channel and makers for being biased with Arjun and said that the the Dhaakad Girl aka Divyanka deserved the winner’s trophy. And we must say that her loyal fans have made sure that she becomes the winner as they have sent her the trophy made by them, which is similar to what Arjun won. The actress shared her happiness and posted a video with a trophy and wrote, “Lo mil gai…This is insanely creative. Hence, I couldn’t resist sharing this gift of love with you all. Vote of thanks to banta hai…”My very loving people it must be some good Karma or I may be in good books of God to have you all in my life, otherwise how did I get this lucky? I can imagine the amount of thought, coordination & effort that must have gone into it! Thanks for making my victories and losses so special and becoming an inseparable part of my life.”

The untimely demise of Sidharth Shukla has left a huge void in the hearts of fans and the TV world. He left us in a shocking manner when he was at the pinnacle of his success. People have been worried about how Shehnaaz Gill is holding up herself after the tragedy. Her debut film is all set to release in October. Honsla Rakh stars Diljit Dosanjh and Sonam Bajwa along with the Bigg Boss 13 contestant. Kushal Tandon who was a very close friend of Sidharth Shukla did a live session on Twitter with his fans. A person asked him if he did work with Shehnaaz Gill and to say something about her. Kushal wrote, “Dost ki jaan this, hai aur rahegi.”

SidNaaz fans have been waiting for Shehnaaz Gill to get back to normal. However, she is still grieving and may take some time to get back to normal life. Fans have been sending messages across her way through social media and awaiting her return to Instagram and Twitter, so that they can interact with her again. In fact, just recently a post went viral, which was being circulated as Shehnaaz’s first social media post for Sidharth Shukla post his demise. However, the post was fake and the singer-actress has made no such post as yet. However, we now know when Shehnaaz will finally return to social media. Shehaaz has big project – the Punjabi film Honsla Rakh with Diljit Dosanjh and Sonam Bajwa that is releasing this month. The trailer has been received well and whatever little we have seen of Shehnaaz, she looks truly in her element – the unapologetic Punjaban that fans have come to love. There is also buzz that she will be shooting a promotional song for the film either in India or UK in the coming few days. She is slowly but surely getting back, while she is still shattered and grieving Sidharth Shukla. We have learnt that Shehnaaz’s social media will get active around the film’s release where the film’s marketing team will share special BTS clips and pictures of Shehnaaz from the film, to keep the buzz going and keep fans hooked.

Kishwer Merchant and Suyyash Rai were blessed with a baby boy on August 27. They named him Nirvair. After a long wait, the new parents, Kishwer and Suyyash have finally revealed the face of their son. They posted a reel, which shows a transition of a plastic doll to a cute little baby boy with the most gorgeous eyes.