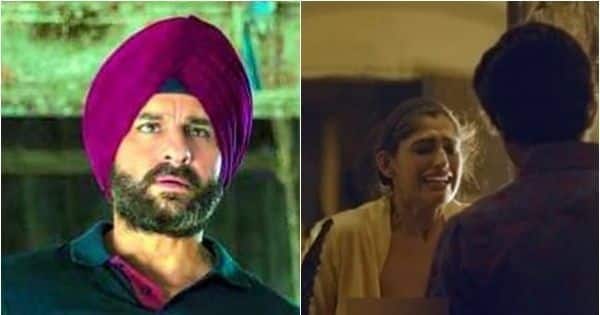 Sacred Games has remained one of the most searched web series online. The Netflix series featured Nawazuddin Siddiqui, Saif Ali Khan, Pankaj Tripathi, Kubbra Sait among others in prominent roles. The series also set a new benchmark in the industry when the first big name like Saif from Bollywood took the OTT route to showcase his abilities. And if you ask him to name his favourite portion from the series, Saif would pick the scene when Kukoo (played by Kubbra Sait) reveals her gender to Ganesh Gaitonde (Nawazuddin Siddiqui). Also Read – Sacred Games 2 trailer: Nawazuddin Siddiqui, Saif Ali Khan are back with a bang! – watch video

The intense scene shows Kukoo crying inconsolably after she locks herself in her room. Gaitonde pursues her to know from what situation she has been going through. She allows him to enter the room. Kukoo is seen shedding tears as she talks about not being able to fulfill Gaitonde’s ambition of bringing up a family together. When Gaitonde prods her to tell her the reason behind it, Kukoo then removes her robe to reveal her gender to him. It was one of the most emotional and powerful moments between Kukoo and Gaitonde in the series. Also Read – [Watch EXCLUSIVE Video] Nawazuddin Siddiqui and Nandita Das react to Ganesh Gaitonde memes from Sacred Games and then this happens…

“When Kukoo reveals her gender to Gaitonde, that scene is so disturbing and lovely. I’ve never seen anything like this in international cinema. I think that’s why we were nominated for an Emmy,” Saif told The Indian Express adding that Sacred Games has the “the best and most adventurous piece of writing” he’s ever been involved with.

Earlier, when Kubbra, who played the role of a transgender cabaret dancer in Sacred Games, had opened up about shooting for her frontal nudity scene. “He (Anurag Kashyap) made me do the scene 7 times – every time after the scene, he’d come to me and say I am making you do this so many times, sorry haan… don’t hate me, I know you hate me, don’t hate me.” She added: “I would literally fall on the floor crying every time. He made me cry real-time 7 times. And when we finished the scene, I was still crying on the floor and he hugged me and said I love you so much and thank you for giving me this scene. I walked out of the room and everyone clapped, I didn’t know it was so beautifully done,” she had told Times Now.

On the work front, Saif, who was last seen Bhoot Police, awaits the release of Bunty Aur Babli 2 and Adipurush.