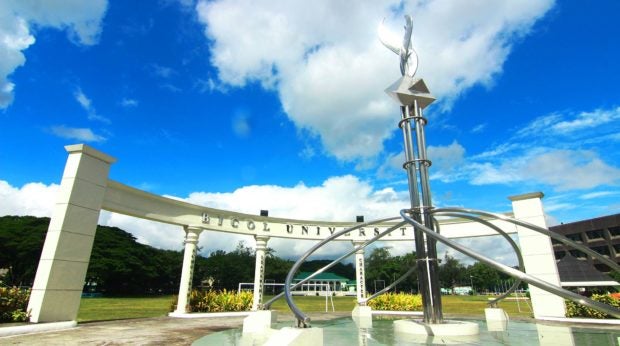 The twin explosions happened around 6:30 p.m., causing police to tighten further their monitoring of peace and order in the region. The Bicol police had been on red alert since Oct. 1 for the filing of certificates of candidacy of those running for various government offices in the May 2022 elections.

A report from the Philippine National Police Explosive Ordinance Disposal unit said two cartridges from the M203 grenade launcher were recovered in the incident area.

“A reconstruction [was] done by police and crime laboratory personnel and they found out that a grenade launcher was used and fired after they found a cartridge in a grassy portion inside the campus,” said Major Maria Luisa Calubaquib, Bicol police spokesperson.

The other cartridge was found in a nearby pavement, Calubaquib added.

She said the explosion damaged the pavement in front of the school administration building and the grassy area of the campus. No one was hurt.

She said they would conduct further investigation to trace the cartridges back to their origin and the weapon owner to determine the perpetrator.

Asked if there was a possibility that the communist rebels were behind the incident, Calubaquib said: “We will consider all the angles and check who is responsible, the left (rebels) and the person who has the guts to create a scare and alarm in the city.”

After the blast Monday, work in BU’s main campus in Legazpi City and Daraga town was suspended.

“We want to assure our employees of safety, so for the meantime, they work from home. Once the investigation is [finished], we will resume work [in the school],” Arnulfo Mascariñas, BU president, told the Inquirer in a phone interview Monday.

Mascariñas said the explosion frightened and alarmed BU personnel but were thankful no one was hurt in the incident.