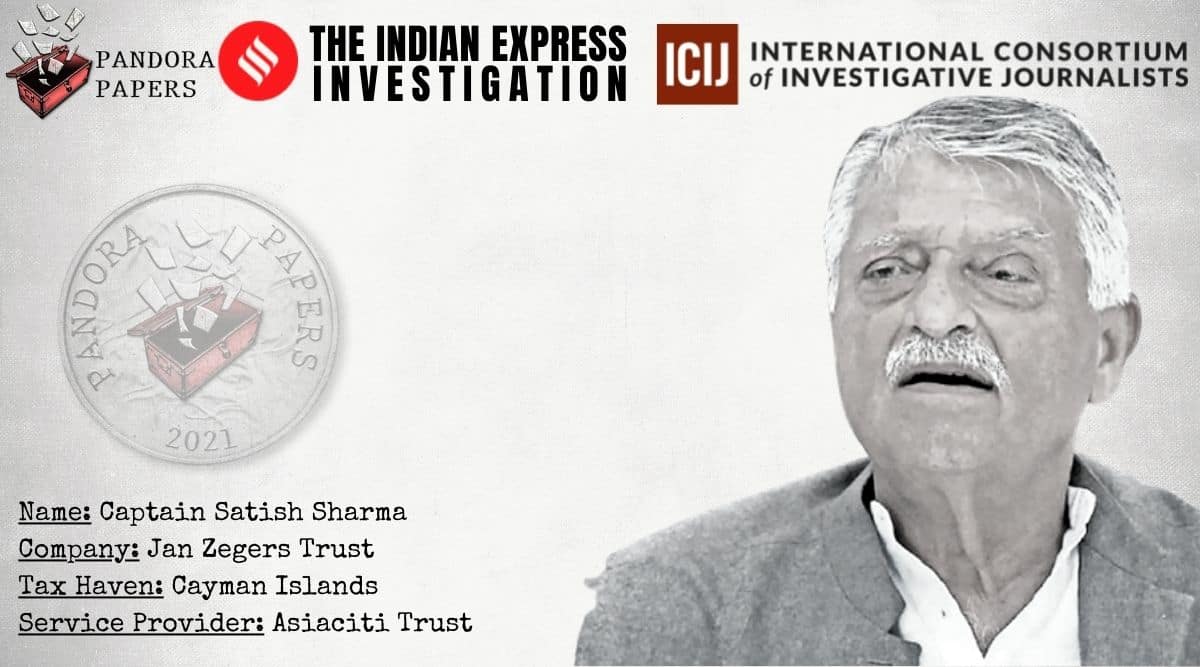 Captain Satish Sharma, Congress leader, friend of the Gandhi family, and a former Union Minister who passed away in February this year, had offshore entities and properties abroad, the Pandora Papers show.

At least 10 members of Sharma’s family including his wife Sterre, children and grandchildren are among the beneficiaries of a trust, the Jan Zegers Trust — a declaration Sharma never made to the Election Commission while filing poll nomination papers.

According to documents of the AsiaCiti Trust, the Jan Zegers Trust was incorporated in the Cayman Islands in 1995 — Sharma was then Minister of Petroleum and Natural Gas – and later under the governing law of New Zealand.

Another trust, named the JZ II Trust, was incorporated in New Zealand in October 2015 when Sharma was a Rajya Sabha member.

He was protector of the two trusts and his wife Sterre a beneficiary. The documents suggest he was managing his properties in France and Singapore and transferring several payments to Sterre through bank accounts of third parties. Trust was declared in Income Tax returns, my family and I have no role in companies: wife Sterre

Most of the remittance orders had been categorised as high risk with a note: “reason for classification as a high risk remittance: Sterre Sharma is married to an Indian politician, Satish Sharma.”

The Kalakar Trust’s Delhi address in the Pandora Papers is of a property owned by Sterre as per Sharma’s affidavit filed with his Rajya Sabha nomination in 2010.

In his declaration while filing the nomination for the Rajya Sabha elections in 2004 and 2010, the only immovable property outside India that he declared was Sterre’s “inherited house” in Amsterdam.

Approximately Rs 4.28 crore (EUR 4 lakh and USD 1 lakh) of that was to be sent in several tranches to Sterre Sharma through Kul Rattan Chadha in his account at the Jammu & Kashmir Bank in Vasant Vihar, Delhi branch.

Chadha, also named in the Panama Papers, lives in Amsterdam. Documents show that when the Jan Zegers Trust was formed in 1995, he signed as “witness” on requisite documents. Chadha did not respond to an email seeking his comments.

Responding to queries from The Indian Express, Sterre Sharma, in a written reply (full response online), said:”Jan Zegers Trust was incorporated in 1995 by my late father as Settlor, as a mechanism to manage his assets and pass on his inheritance to the beneficiaries which included his wife, the issue and remoter issue of the Settlor (my father) and his wife, the husbands, wives, widows and widowers of the issue of the settlor and his wife and the Kalakar Trust of New Delhi India which has done commendable charitable and philanthropic work in India.

Jan Zegers II trust was incorporated to help liquidate the trust assets to pay French taxes on trust property, which tax demand far exceeded the value of the trust property. Late Mr Satish Sharma was made a Protector of the Trust, who could act in place of Settlor(my late father), in case Settlor is not living (died) or was under a disability or incompetency to provide continuity. For all purposes heirs of my late father were beneficiaries and all powers and control vested in my late father….

I declared the Trust in my IT return since FY 2016-2017. Family Settlement was underway. Assets were liquidated to pay French Taxes which exceeded the value of property. Final Tax claims have been settled only this year in recent past months. Once family settlement is arrived at, whatever the taxes fall due in each jurisdiction shall be duly paid. Trustees were mandated to strictly carry out all regulatory compliances.

Companies are formed solely to manage assets under the trust which holds inheritance of my late father and are to be duly wound up with the Trust. None of my family members or myself to my understanding have any role in these companies.

I do not have access to anything here as I am out of India and am not able to respond to any specifics like this which I am not aware about….

As already told there are no assets presently, and were required to be liquidated to pay taxes in France for asset, which taxes exceeded the value of asset, taxes have been recently settled, and the balance is to be distributed after a family settlement, and on disbursement taxes will be paid as falling due in each jurisdiction as per applicable laws there. We had started this legal process long back. Meeting was held to fulfil the mandate granted by my late father to safeguard his inheritance.

I am told that PEP is a categorisation made not by Asiaciti, but is an internationally published list and publicly searchable database, which includes a number of Indian politicians and bureaucrats both past and present. This requires a higher level of compliances and is a good thing to curb malfeasance of public office. My late husband ceased to be a Minister in 1996 and MP in 2016.

I have declared as per law when it was required. As the trust had inheritance from my father, when it is actually passed to me by way of distribution of my share to me, I will duly reflect that sum in my income tax return and pay tax as Indian resident, though I am a Dutch national.

…I have carried out human service and philanthropy through my own hard earned income to uplift poor children and artisans, which your system will neither account for or acknowledge, where through your enormous prism of male privilege, I am to be treated as an appendage to and answer for my late husband even for the inheritance of my side of family, having no connection with India, except for passing some benefits for charitable activities in India.

…In any case the objective of ICIJ in this as outlined in your mail itself is primarily an investigation into offshore finance, due diligence and compliances and use of offshore trusts etc for money laundering, while we are acknowledging that these structures have legitimate purposes as well, these are not applicable in our case.”