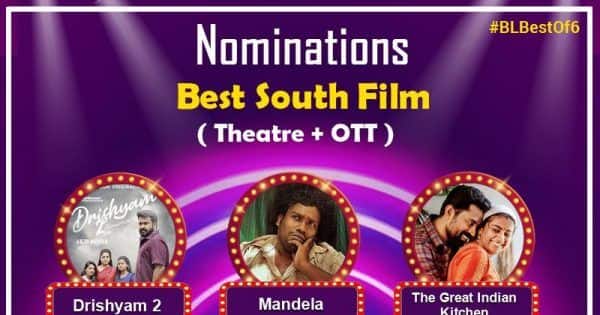 It’s that time of the year. Yes, we are talking about #BLBestOf6, a people’s choice segment in which you all get to vote and decide the best content and artists across various categories. Today, we are talking about the best south films that released in the first half of 2021. We have some really strong contenders in this one. So let’s explore. Also Read – #BLBestof6: Kuch Rang Pyaar Ke Aise Bhi 3, Bade Acche Lagte Hain 2, Balika Vadhu 2 and more – vote for the Best New TV show in the first half of 2021

There are not many film sequels that live up to the original but Drishyam 2 was one of them. Mohanlal as Georgekutty was brilliant yet again as he tried to save his family. The climax was totally worth it. Also Read – #BLBestof6: Shershaah, Bell Bottom, Thalaivii, Mimi, Ajeeb Dastaans – vote for the best film in the first half of 2021

This political satire comedy-drama spoke about many relevant issues. Set on the backdrop of a village panchayat election, the film had a brilliant ensemble cast.

The Great Indian Kitchen deserved to be watched by all Indians. It was about a newlywed woman who struggled to adjust with her sexist husbands and in-laws. The climax of the film will stay with you for a long time to come.

Directed by debutant Praveen Kandregula, this comedy drama also featured many debutant actors. The plot of the film revolved around a group of young filmmakers try to make a film through a camera they found.

This comedy-drama followed three happy-go-lucky men who arrive in the city for a better life but land up in jail for a crime they didn’t commit.

﻿
Starring Kunchako Boban, Joju George and Nimisha Sajayan in the lead roles, this political thriller had many unexpected turn of events that kept the story rolling unrelentingly.

So, which one is your pick? Vote below and let us know: