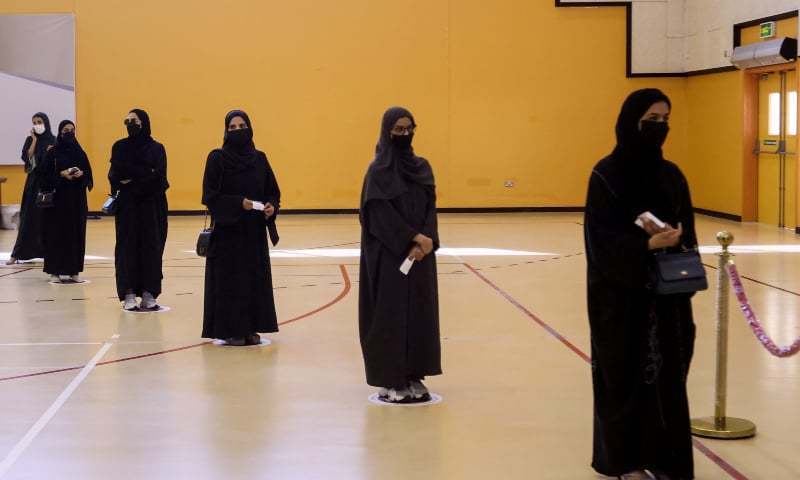 Voters chose none of the 26 women who stood for election in Qatar’s first legislative polls on Saturday, disappointing candidates who had wanted to lend a voice for women and other Qataris in the Gulf monarchy’s political process.

The vote was for 30 members of the 45-seat advisory Shura Council while the emir will continue to appoint the remaining 15 members of the body that can approve a limited scope of policies for the small but wealthy country, which bans political parties.

“To have all men is not the vision of Qatar,” said Aisha Hamam al-Jasim, 59, a nursing manager who ran in Doha’s Markhiya district. She urged Qatari women to start “voicing what they believe in” and vote for strong women candidates in future.

“For the first time in Qatar, this is the opportunity to take part in the political process,” she said as people trickled into the polls earlier on Saturday.

Jasim, like fellow female candidates, said she had encountered some men who thought women should not run. Highlighting her administrative skills, she focused on policy priorities like health, youth employment and retirement.

“I just say: I’m strong, I’m capable. I see myself as fit as a man … If you want to see me as weak, that’s up to you, but I am not weak,” she said in the polling station where men and women had separate entrances.

While Qatar has introduced reforms to women’s rights in recent years, including allowing women to independently get a driving license, it has been criticised by rights groups for issues like the guardianship system, where a woman needs male permission to marry, travel and access reproductive healthcare.

Human Rights Watch in March said that when in 2019, women tweeted from an anonymous account about Qatar’s guardianship system, the account shut down within 24 hours after cyber security officials summoned one woman.

Naima Abdulwahab al-Mutaawa’a, a candidate and foreign ministry worker whose elderly mother came to vote for her, had wanted to press for a body advocating for women and children.

Several female candidates had been seeking to improve the integration into Qatari society of children of female citizens married to foreigners who, like in other Gulf states, cannot pass their Qatari nationality to their children.

While Jasim stopped short of advocating for granting passports, fellow candidate Leena al-Dafa called for full citizenship for children in such cases.

Dafa, a writer, does not see those who oppose women in the Shura Council as an obstacle because the ruling emir — and the law — support female participation.

“The law gives me this right … I don’t care what aggressive people say about that,” she said, adding that women were best suited to discuss their issues.

Al-Maha al-Majid, a 34-year-old industrial engineer stood for election, alongside her policies, to change mindsets.

“To convince the males (to vote for women), yes, we may have to put in work or extra effort … I’m willing to take this extra effort in order to be in and to convince this society that the women can do so,” she said.

For some, attitudes are hard to shake.

“They are here, they have their fingerprint and they have their vote and a voice … But most important is in the house, to take care of the kids with the families,” he said at a polling station where Jasim and Mutaawa’a sat across the room from him.