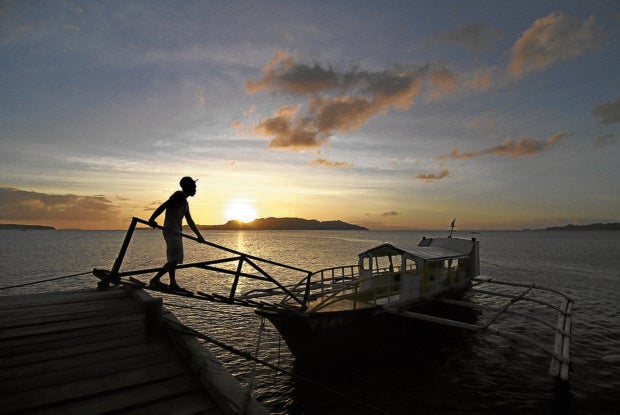 BEHIND THE BEAUTY The sunset on Dinagat Islands is a sight to behold, drawing in travelers before tourism was shut down by the coronavirus pandemic. This island province in the Caraga region has only three infirmary-like hospitals and is now having a hard time coping with a surge in COVID-19 patients. —ERWIN MASCARIÑAS

DAVAO CITY—Doctors assigned in geographically isolated provinces in the country said they had been left out in the government’s COVID-19 response.

Since health services have been devolved to local government units, poor and far-flung towns are often left to fend for themselves to deal with the COVID-19 pandemic, the reason doctors perennially experienced the lack of testing kits and other medical support which already persisted even before the COVID-19 pandemic, according to the doctors belonging to Community Medicine Practitioners and Advocates Association (Compass).

As the coronavirus surge continues in parts of Mindanao, the doctors said they were increasingly worried as COVID-19 affected their neighbors, relatives and friends.

“Despite being infected or quarantined themselves, [the doctors] are valiantly trying to continue working within the health-care system that is now near imminent collapse,” said Dr. Magdalena Barcelon, Compass president.

Dr. Jillian Francise Lee, provincial health officer of Dinagat Islands, said this was especially true in her province and among the province’s third and fifth class towns, which ever since had a very small budget for health.

She said that in the beginning of the pandemic, Dinagat Islands used to enjoy zero COVID-19 cases until the national Inter-Agency Task Force on the Management of Emerging Infectious Diseases (IATF) ordered all local governments to open up their borders in March this year.

“We used to have zero cases because people were only confined in the province but when the IATF ordered the borders open, we started to have cases until we had a surge,” she said in a virtual press conference, “Dok, okay ka pa ba?,” organized by Compass this week.

Lee said the province, which only has three district hospitals that only function as infirmaries, had been having a hard time dealing with the surge of cases. “Our infirmaries, which can accommodate only 10 patients, are now taking care of 40 [COVID-19] patients,” she said.

In Zamboanga City, Dr. Fernando Cheong, a pediatrician, said the situation had been getting worse, with more than 200 COVID-19 cases recorded a day and many of the health personnel infected.

In one hospital alone, three doctors already got admitted and all hospitals in the city are running out of medical oxygen supply, he said. “Hospitals are also short on nurses. More people are getting infected with COVID-19,” lamented Cheong. “Close friends and some relatives are the ones getting infected and it is scary.”

The CHO said that 99 percent of the active cases came from the community while the rest came from outsiders traveling to the city.

Cheong, who has been in quarantine after having been exposed to a presymptomatic patient, said cases had been going up because the government had not controlled the movement of people, and that people continued holding social gatherings and parties even with the threat of the virus.

—WITH A REPORT FROM JULIE ALIPALA INQ