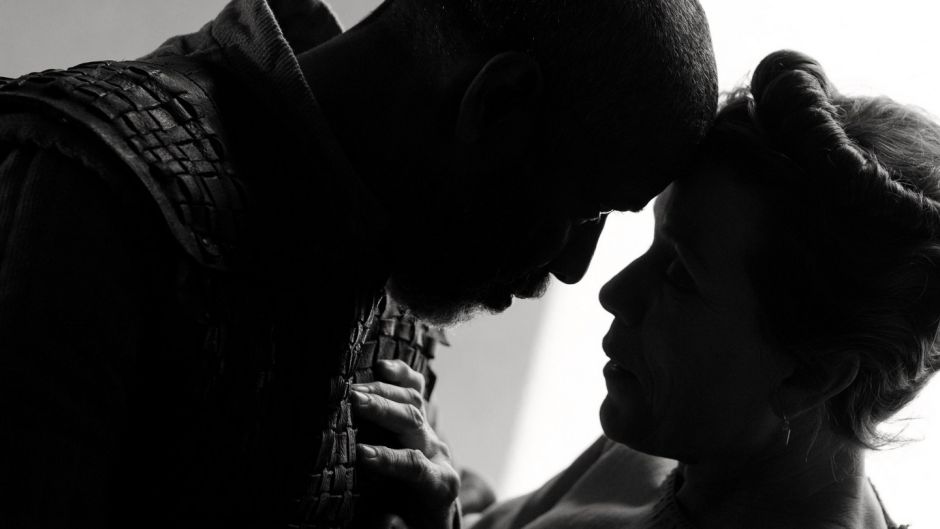 Double, double, toil and trouble. On Saturday evening, Saoirse Ronan makes her UK stage debut as Lady Macbeth at London’s Almeida theatre. The Yaël Farber-directed production of Macbeth sees the multiple-Oscar nominee playing opposite James McArdle in what’s described as “an elemental production about a world in transformation, the shadows in all of us, and one couple’s spine-chilling quest for power”.

Ronan told the BBC that she and McArdle decided to compare the regicidal pair to a certain more contemporary couple.

“We keep thinking about Macbeth and Lady Macbeth as like a Kim and Kanye situation, where there have been stages to their success and real kind of highs and lows,” she said. The reviews should be interesting.

Meanwhile, Joel Coen’s The Tragedy of Macbeth, with Denzel Washington and Frances McDormand, premiered to raves last weekend at the New York Film Festival. The first film to be directed by one Coen brother without the other is “based on the tragedy of the same name by William Shakespeare” and will have an Oscar-adjacent Christmas cinema release, with an Apple TV+ streaming slot to follow in January. Brendan Gleeson plays the unfortunate Duncan.

“What’s the point of another Macbeth movie?” asked Peter Bradshaw in the Guardian, before emphatically answering his own question. “Joel Coen has delivered a stark monochrome nightmare, refrigerated to an icy coldness. With Shakespeare’s text cut right back, it’s a version that brings us back to the language by framing the drama in theatrical, stylised ways: an agoraphobic ordeal in which bodies and faces loom up with tin-tack sharpness out of the creamy-white fog.”

Several reviews have positioned Coen’s new film within a venerable cinematic tradition: of all Shakespeare’s tragedies, the Scottish play has long been the most appealing to filmmakers, with memorable interpretations by some of the greatest directors, Welles, Kurosawa and Polanski among them. It’s not hard to figure out why. Macbeth’s language, plotting and pace lend themselves more easily to film than the other tragedies do. The witches, ghosts and apparitions also help. It’s even got two (very ropey) surprise twists (spoiler alert: Macduff has something to tell you about the circumstances of his birth, plus there’s something funny going on with those trees).

There’s more toil and trouble on the way soon. In the week of release of his much-delayed final outing as James Bond, Daniel Craig has announced that he too will be seeing a dagger before him from next March on Broadway, with another familiar Irish name, Ruth Negga, urging him to screw his courage to the sticking place.

Like the Olympics or American presidential elections, the Shakespearean tragedies mark out a quadrennial rite of passage across decades of Irish life

That’s a lot of star wattage descending on one 17th-century play in the space of six months. Is Saoirse Ronan right and does Macbeth have something particularly relevant to say at this particular moment? Or is it just the most accessible – and therefore commercial – of the great tragedies?

One select slice of the population may feel a particular twinge of recognition. Like the Olympics or American presidential elections, the Shakespearean tragedies mark out a quadrennial rite of passage across decades of Irish life. Hamlet, King Lear, Othello, Macbeth… the cycle is constant and unchanging (or has been since the 1980s, when the powers-that-be finally replaced the unloved Coriolanus with the previously unacceptably louche Othello). Every year, honours English students have had to answer a compulsory question on whichever play’s Buggins’ turn had come around (the exception being 2021, when Covid rules rendered the question optional). As a result, whatever their experience of the rest of Shakespeare’s work, millions of people have one particular play, for good or ill, lodged somewhere in their brains.

I was a Macbeth kid, and over the years have come to the unscientific conclusion that it’s the most popular of the Big Four for the same reasons it appeals to filmmakers: the high drama, the visceral violence, the relative simplicity of the narrative. And, of course, its towering, intriguing, sympathetic, repellent central character, the one who’ll be played by Ronan, McDormand and Negga.

Dithering, timorous Macbeth signally fails the job description for a tragic anti-hero. “Now does he feel his title hang loose about him, like a giant’s robe upon a dwarfish thief,” contemptuously observes Angus as the walls close in on the usurper. It’s Lady Macbeth, raging against the constraints of her sex and the weakness of her spouse, forcing him to action then tortured by the consequences, who still grips our imaginations and offers such an enticing opportunity for those who get the chance to play her.

The Leaving Cert class of 2023, currently in the early throes of a two-year spin cycle of rote learning and answer-memorisation (something wicked this way comes) at least have something they can look forward to. Receive what cheer you may. The night is long that never finds the day.